PAPA ROACH has dropped off the remaining European tour dates with FIVE FINGER DEATH PUNCH due to "logistical challenges and uncertainties" in the wake of the November 13 terrorist attacks in Paris and continued terrorist threats against France and Europe.

Says PAPA ROACH in a statement: "It is again with a heavy heart that we are announcing the postponement of the remainder of our European tour.

"We pride ourselves for rarely canceling shows, but our crew is an essential part of our organization and because they, unfortunately, could not continue the tour due to their logistical challenges and uncertainties, we could not either. We respect them and have had to accept their difficult choice to return home. We shall return next year. We will announce more details on rescheduling as soon as we are able to. "

Adds FIVE FINGER DEATH PUNCH in a separate statement: "Despite some significant challenges in Europe since the horrible events in Paris recently, we have continued on our tour and remained dedicated to our mission of providing you, the fans, the highest quality show in the safest possible show environment. As a result of new and increased travel/transportation restrictions and challenges, in some cities we are scheduled to play, we are unable to fulfill this promise, so we were forced to postpone those shows. We continue to face additional challenges but remain committed to finishing out the tour as best as we can.

"We are not a band that is used to postponing or canceling shows. In fact, we have always prided ourselves on showing up onstage no matter what, so these extenuating circumstances have been particularly challenging for us, as artists, given the high standard we place on ourselves to deliver for the fans.

"We appreciate everyone's support as we continue to navigate these largely uncharted waters. Nothing gives us greater satisfaction than delivering the best show possible in the safest conditions."

FIVE FINGER DEATH PUNCH canceled a show in Milan, Italy on Sunday (November 22) amidst rumors that the Islamic State (ISIS) was planning to attack the show as part of a series of multiple attacks spread across several countries.

The hacktivist group Anonymous claimed to have uncovered plots by ISIS for several terrorist attacks to occur on Sunday, including at a pro wrestling event in Atlanta and other locations in Paris, Rome, Lebanon and Indonesia, in addition to the concert in Milan.

The rumors of the attacks came a week after a deadly terrorist attack at seven locations in Paris, including an EAGLES OF DEATH METAL concert where 89 people were killed.

The hacktivists said the information about the fresh attacks was received from "several pro-(ISIS) accounts."

A number of artists halted their European treks in the wake of the Paris attacks, including FOO FIGHTERS, DEFTONES and others. 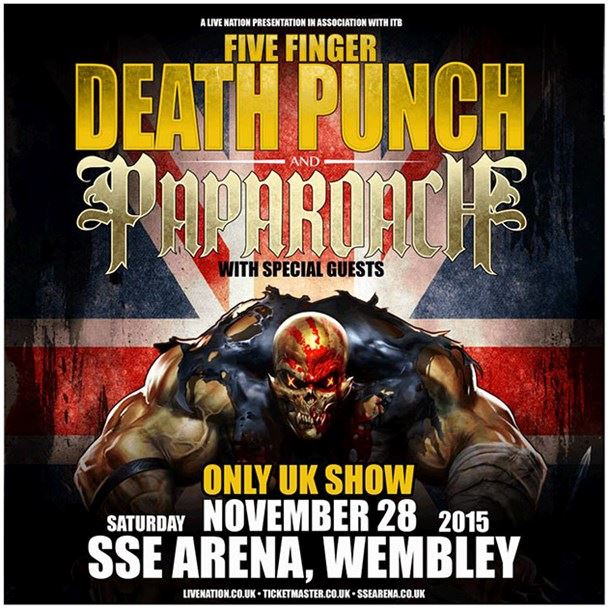