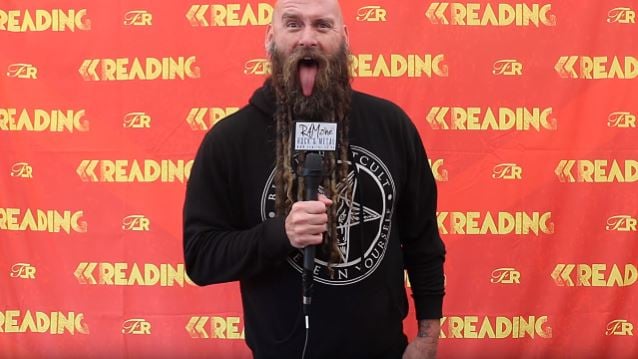 Speaking about what it is like being in a band with such "distinct" personalities, Kael said: "We're all brothers. We fight like brothers, we make up like brothers. Arm-wrestling contests, pissing contests… all this stuff; we're doing it all the time. But it makes for what we are."

Chris also talked about FIVE FINGER DEATH PUNCH frontman Ivan Moody, who has an uncanny ability to channel his rage into anthems of anger. Asked if Ivan is as angry as he appears to be, Kael said: "Not really, no. He's a very complex individual, though."

Kael went on to credit the FIVE FINGER DEATH PUNCH singer for writing songs and singing them in a way that tens of thousands of people can relate to. "Ivan does all the lyrics, all the vocal melodies," he said. "We'll chime in here and there for a couple of melodies or whatnot, but he's great at what he does. He's able to catch that third rail where he can connect to massive audiences. I mean, it takes a certain personality to be able to reach out in that type of crowd and give everybody that personal experience, and Ivan Moody's a guy that's able to do that."

FIVE FINGER DEATH PUNCH's latest album, "Got Your Six", was officially certified gold on August 8 by the RIAA (Recording Industry Association of America) for sales in excess of 500,000 copies.

FIVE FINGER DEATH PUNCH announced a new co-headlining arena tour with SHINEDOWN that will kick off on October 18 in Little Rock, Arkansas and run into December. SIXX A.M. and AS LIONS will be along as support.