Craft Recordings is set to release a deluxe, 20th-anniversary reissue of FILTER's platinum-selling, sophomore album "Title Of Record". Due out August 9, the album has been remastered and will be available on vinyl for the first time, as well as on CD and digital. All formats are expanded featuring four bonus tracks: "(Can't You) Trip Like I Do" (originally recorded for the cult-classic soundtrack "Spawn The Album"), "Jurassitol" (previously released on "The Crow: Original Motion Picture Soundtrack"), plus remixes of the singles "The Best Things (Humble Brothers Remix)" and "Take A Picture (H&H Remix)". Both the two-LP set, and CD will feature new liner notes by author, journalist, and "Side Jams" podcast host Bryan Reesman. The expanded digital album also offers five additional rarities, including a live version of "Take A Picture", "The Best Things (Dub Pistols Club Mix)" and more.

The recording process for "Title Of Record" was not so straightforward. The album took over four years to record, due in part to strife between bandmates, Richard Patrick's struggles with substance abuse, and a tumultuous affair between Patrick and Wretzky (which was anonymously woven into many of the songs on the album, including "Miss Blue", "It's Gonna Kill Me" and "I'm Not The Only One"). In the reissue's liner notes, Patrick recalls: "My behavior started getting worse, and my temper would flare up. It was hard dealing with me high…and coming down from that."

Dark as the themes were on "Title Of Record", the album was melodically diverse, offering a more radio-friendly sound than "Short Bus", with lush, vocal harmonies, introspective lyrics and even touches of psychedelia. Perhaps the best example of this is in the album's second single, "Take A Picture", which would go on to become the band's biggest hit. Written about Patrick's inebriated antics on a plane trip, the languid melodies portrayed the musician's state of mind at the time. "[The song had] this luscious bed of gorgeous chords and dreamy sound because itʼs what drugs feel like," explains Patrick (who has been sober since 2002). "It was the reality of being a drug addict or an alcoholic — Iʼm either dreaming or Iʼm not."

Upon its release, "Title Of Record" was a commercial victory, peaking at the No. 30 spot on the Billboard 200, and opening the door for nearly a year of touring by the band. The album also won wide critical acclaim — Entertainment Weekly declared that FILTER's "attention to melody and craft is refreshing," while Rolling Stone praised Richard Patrick as "the most expressive and daring of the new industrial rockers, the most willing to expose the vulnerability that lurks behind the jackboots and black leather trench coat."

Listening to the album again, 20 years later, Patrick reflects: "'Title Of Record' is FILTER's crowning achievement. Our signature album. It's amazing how much I loved making this record even though it almost killed me."

Following the success of "Title Of Record", FILTER would release five more albums, while Patrick would also join supergroups THE DAMNING WELL (featuring members of NINE INCH NAILS, A PERFECT CIRCLE and LIMP BIZKIT) and ARMY OF ANYONE (a collaboration with brothers Dean and Robert DeLeo of STONE TEMPLE PILOTS). In 2018, FILTER fans were thrilled to hear the announcement that Brian Liesegang and Richard Patrick had reunited. The duo is currently working on a new album together.

FILTER's most recent LP, "Crazy Eyes", came out in April 2016 via Wind-Up Records. 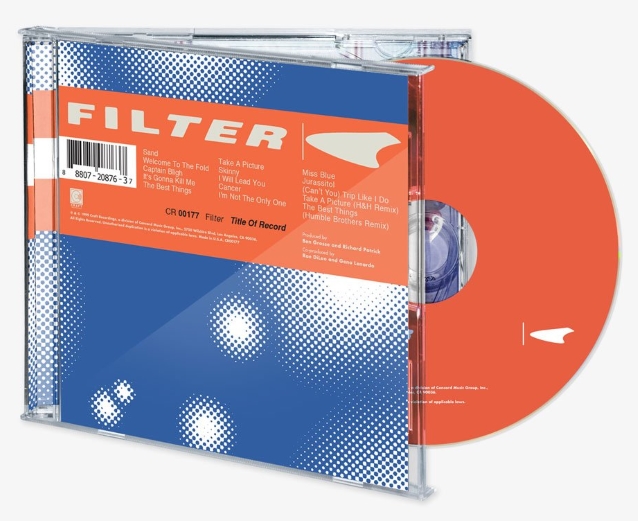