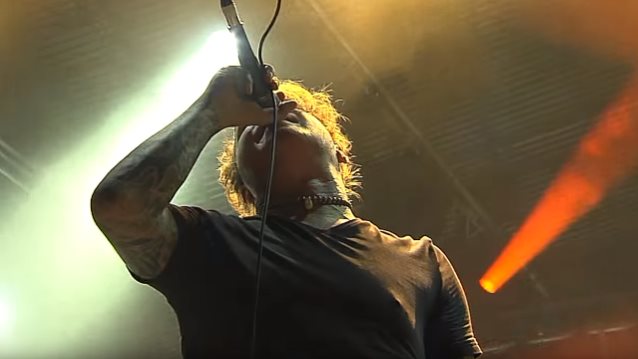 Australia's Metal Ignition recently conducted an interview with FEAR FACTORY vocalist Burton C. Bell. You can now listen to the chat in the YouTube clip below.

Speaking about the songwriting process for FEAR FACTORY's latest album, 2015's "Genexus", Bell said: "All the writing was done after the last 'The Industrialist' tour, and pretty much all of 2014… most of 2014 and into 2015 was about writing the album and recording it. It was a long process. We really wanted to do it right, take our time. We would write, record, and then we'd listen to it and then we'd start rearranging, because we would record directly into Pro Tools, so we would be able to rearrange it. And we were able to [go], 'Okay, let's see how it sounds better,' then record it that way. So we just kept making them better and better until they were, like, 'Yeah, that sounds like a FEAR FACTORY song.'"

"Genexus" was released on August 7, 2015 via Nuclear Blast Entertainment. The follow-up to 2012's "The Industrialist" was co-produced by longtime collaborator Rhys Fulber, along with guitarist Dino Cazares and vocalist Burton C. Bell and mixed by Andy Sneap (ARCH ENEMY, TESTAMENT, EXODUS, MACHINE HEAD). Artwork was once again handled by Anthony Clarkson. Drums on "Genexus" were performed by Mike Heller (MALIGNANCY).