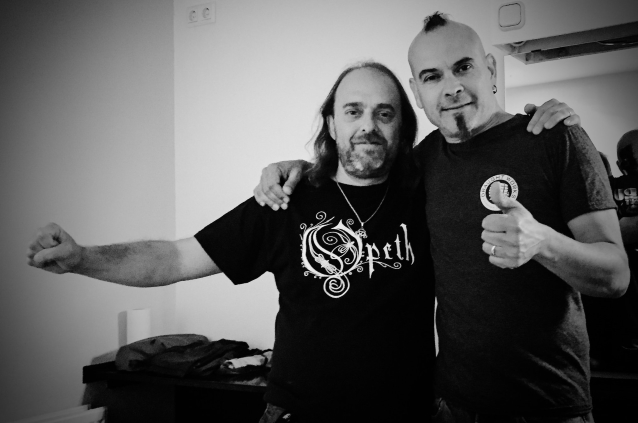 Vera broke the news of his absence from next month's gigs in a Facebook post on Friday (February 22). He wrote: "Dear friends, Just a quick heads up with something regarding the upcoming FATES WARNING tour. Over a year ago I had committed to playing a gig with ARMORED SAINT in Athens, Greece this March 15. I wish to honor that commitment but that means that I'll sadly have to miss a couple of gigs with FATES in order to do it. So i will be not playing on the Detroit, Chicago and Milwaukee shows. (Some of my favorite cities by the way!).

"Luckily for us, and YOU, my brother and OG FATES WARNING bassist Joe DiBiase will be stepping up once again for these three gigs. So this will be amazing!

"I will resume in Minneapolis with FATES.

"I am currently practicing over 37 songs for the upcoming gigs with MOTOR SISTER, ARMORED SAINT and FATES WARNING. My head is spinning out. But, not to pity me. This is the bed I've made for myself this time.

"I'm very sorry I'll be missing these three gigs but I know you'll be in good hands. i look forward to seeing all of you out there very soon!"

DiBiase will play the following shows with FATES WARNING:

A founding member of FATES WARNING, DiBiase left the group in 1996.

In a 2001 interview, Joe stated about his reasons for exiting the band: "Well, we just finished the 'Inside Out' tour which was especially long and grueling and it seemed to take its toll on our relationships within the band. So we decided to take a bit of a break before the next recording or tour. In the meantime, my wife got pregnant with our son and I had walked into a decent-paying job. By the time we were ready to do something, I had the decision to make. Lose a chance of a decent job with a kid on the way for a month-long tour or not. Plus, I really didn't want to miss my kid growing up. It was a tough decision but one I thought I had to make."

FATES WARNING began in the early 1980s, playing a traditional style of heavy metal. However, they quickly began to adopt a more technically proficient style and are considered by many to be the first true prog-metal band. While the band has subsequently moved in more melodic and ambient directions, they have remained a vibrant and well-respected cornerstone for the prog camp within the heavy metal strata.

FATES WARNING released its latest album, "Live Over Europe", last year to critical acclaim. The first live release featuring the current lineup, it contains 23 songs and was recorded at various European locations during the band's January 2018 headlining tour for "Theories Of Flight" (2016).

Dear friends, Just a quick heads up with something regarding the upcoming Fates Warning tour. Over a year ago I had...