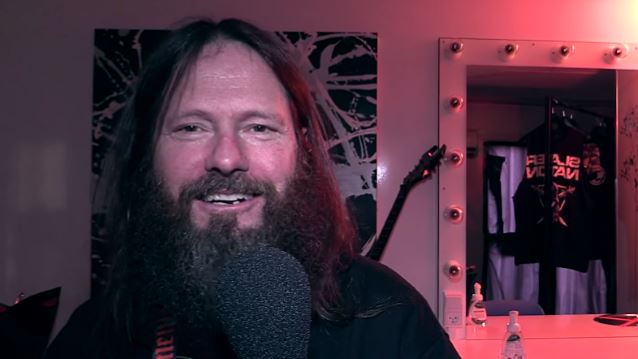 A three-minute video clip in which EXODUS and SLAYER guitarist Gary Holt talks about the pedals and effects he uses — which include Vortex Flanger, Shaker Vibrato and G-major 2 from TC Electronic — can be seen below.

During an appearance at this past January's NAMM show in Anaheim, California, Holt unveiled his new signature model based on the ESP Eclipse. The Gary Holt signature models come in a high-end ESP version (ESP Gary Holt) and two LTD versions, the GH-600 and GH-200. All come with Floyd Rose tremolo system and dual humbucker pickups.

METALLICA guitarist Kirk Hammett, an early bandmate and decades-long friend of Holt, commented, "Gary has influenced a whole generation of metal guitarists with his wicked riffs and leads in EXODUS. I'm happy that he's jumped on for the ESP ride!"

In a June 2012 interview with Full Metal Jackie's nationally syndicated radio show, SLAYER's Kerry King stated about Holt: "I always regard Gary as the Glenn Tipton of our era — really good, really polished and nobody talks about him. To this day, nobody really references [JUDAS] PRIEST and Tipton that much as guitar players and I feel the same way about Gary. EXODUS have a huge following but a little more overlooked than METALLICA, MEGADETH, SLAYER, ANTHRAX — the 'Big Four,' so to speak, so [it is great] to be able to bring him to the forefront and shove him down people's throats and say, 'Hey, this motherfucker kicks ass. Pay attention.'"