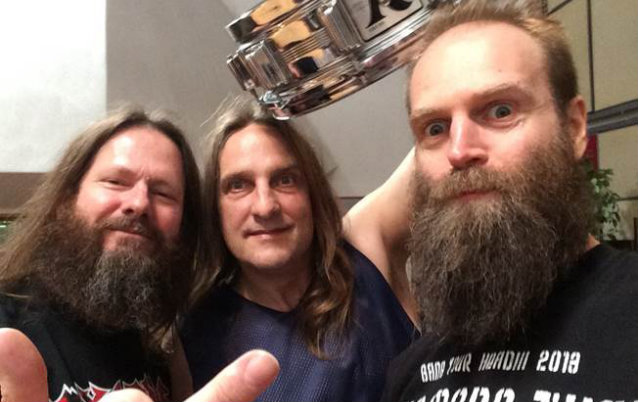 Commented EXODUS guitarist and songwriter Gary Holt: "We are well into drum tracks; everything is going super smooth and Tom [Hunting] is just killing it! Best drum sound this band has ever laid down — sounds just simply pummeling!

"[There is] only one more song [left to lay down] and some B-sides to go, then we go through things and make sure everything is up to par, and then time for guitars!

"Can't wait to add the crunch to these monsters.

"This is gonna be so goddamned heavy, it ain't even funny!

"We couldn't be more stoked and pleased with how this record is coming along! Bludgeoning!"

Holt recently told "Metal Zone" host Nikki Blakk of the San Francisco, California radio station 107.7 The Bone about his plans for a new EXODUS studio album: "I'm heavily in riff mode [right now]. It's always hard to gauge where a record's going right away, but you kind of get a feel for where you're headed mentally, and right now it's really fast. It's ridiculous.

"I wanna make sure that the [next EXODUS] album is as good as it needs to be, and knowing I am going to be on a tight time frame, it does tend to stress me out quite a bit. But I think I write well under stress… I hate the pressure. But I do what I gotta do. We all do. So we'll make it happen."

EXODUS' latest album, "Exhibit B: The Human Condition", was released in North America on May 18, 2010 via Nuclear Blast Records.

The CD sold around 4,600 copies in the United States in its first week of release to debut at position No. 114 on The Billboard 200 chart.

EXODUS' previous album, "The Atrocity Exhibition: Exhibit A", opened with 3,600 units back in October 2007.

EXODUS has announced its participation in a monumental upcoming tour with headliners SLAYER and additional special guests SUICIDAL TENDENCIES. This metalhead's "dream tour" kicks off on May 9 in Salt Lake City, Utah, and hits six more cities, including a stop at the world-famous Rock On The Range festival on May 17 in Columbus, Ohio. Gary Holt will perform double-duty on this run as guitarist for his band EXODUS, while also filling in for SLAYER's fallen guitarist Jeff Hanneman.