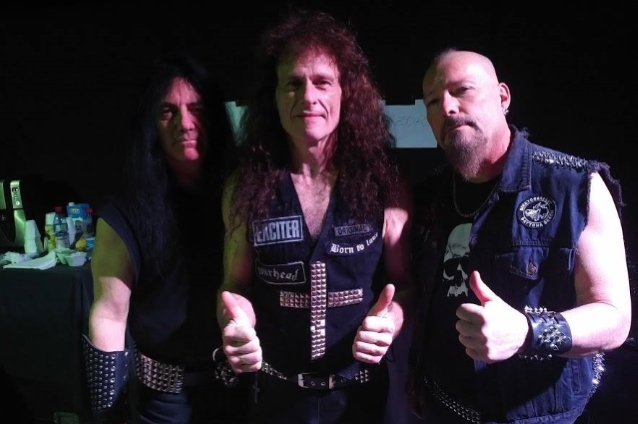 The news of Ricci's exit was broken by bassist Allan Johnson, who wrote on his Facebook page: "Some rather heavy news in the EXCITER camp. Due to certain professional and personal differences, John Ricci has decided to leave the band. I wish to inform the fans worldwide that Dan Beehler [drums, vocals] and I are going to forge on with our songwriting and recording. However, live shows will be postponed until such a time that we can find a suitable guitarist."

He continued: "As I am the sole administrator of the EXCITER Original Facebook page I will continue to post from time to time to keep up the legacy of what we have accomplished over the last four and a half years, but I will no doubt create a whole new Facebook page for the next incarnation of EXCITER. In the meantime, all the best of luck and health to John."

Just this past June, Ricci seemed excited about the prospect of writing and recording new EXCITER material, telling The Jimmy Cabbs 5150 Interview Series: "We're being really careful about the new music that we put out because it has to stand up to the old stuff. We feel kind of pressured. We don't want to put out a weak record, and we're taking our time to make sure the music is going to be just as explosive as it was back in the day when we were making albums together… There's new songs coming out of us all the time, but we want to really jell the new stuff before we have anyone hear it. That's where we are right now. It's going to come out EXCITER no matter what, but we want the songwriting to be really, really strong. We can't come out with a weak album. We keep emphasizing that. We were talking earlier, people have very high expectations because it's the original three guys. We just want to make sure this music is strong."

Some rather heavy news in the EXCITER camp. Due to certain professional and personal differences, John Ricci has decided...