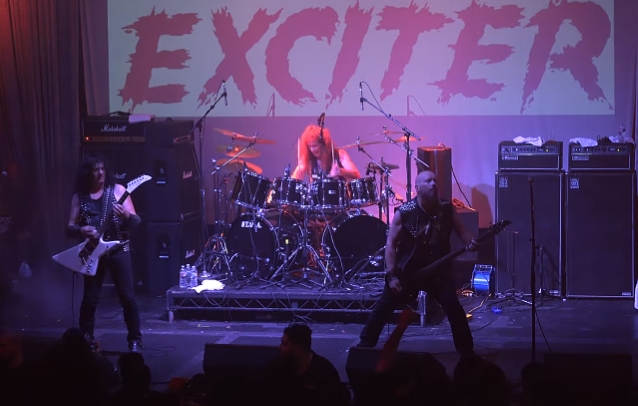 Bassist Allan Johnson of Canadian thrash metal pioneers EXCITER spoke to The Metal Voice about the recent departure of John Ricci. The guitarist has since been replaced by Daniel Dekay, who has previously played with DIEMONDS. Asked why Ricci decided to once again exit EXCITER, Allan said (hear audio below): "Well, that's still somewhat of a mystery. We haven't seen or actually spoke with John since it happened. We got back from our Singapore gig, and we started some e-mail chats back and forth, and John just said he's kind of getting fed up and he wants out. Dan [Beehler, drums/vocals] and I were actually quite surprised about this. First thing I said was we've got shows next year — tentative shows; nothing concrete — a couple coming up. They start to filter in quite quicky this time of year for 2019. So John said, 'You and Dan can go ahead and do the shows without me.' And that was pretty much it. He didn't give a solid reason why. I don't know what he meant by 'fed up,' but he said he was fed up. I confirmed with him. I said, 'Are you sure about this?' And he said, 'Yeah, I'm definitely out.'"

"It's funny because the first thing I said to Dan when I contacted him [to let him know John was out] was I texted him and I said, 'Guess what — it's 1985 all over again,'" Allan said. "And he said, 'What? What?' Like, what's going on? It's funny — it's like déjà vu. [In 1985], we came back from a U.S. tour and John said, 'I'm out. That's it. I don't wanna do it anymore.' And we were, like, 'Well, we've got a Germany tour. What do you wanna do?' And he said, 'Do it without me.' So back then, we got our old guitarist, Brian McPhee, from a band that Dan and I played with before we were in EXCITER. So it was like total déjà vu. Only this time we have an opportunity to do things better than we did back in '85. And by having Dekay onboard, I think we're gonna definitely do that."

Johnson also talked about the progress of the songwriting sessions for EXCITER's long-awaited new studio album, which is tentatively due in 2019. "Well, there's a big, long story about that, and I really can't get into it without ruffling a few feathers," he said. "But Dan and I have been writing constantly, and we've got a lot of ideas that we've just gotta bring together. And it's gonna happen fast. When him and I get together, we write so fast, it's crazy; we can write a song in an hour. So we've just gotta bring his ideas and my ideas together. And then we're welcoming anything that Dekay can bring to the table. We're lucky right now because we don't have any shows coming up anytime soon, so we've got this big break of six months where we can really go at it."