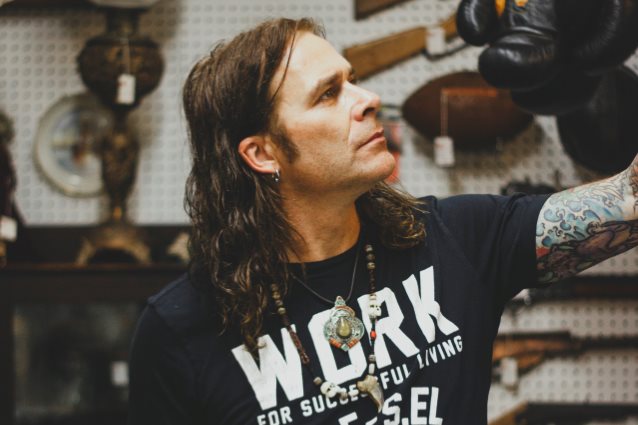 Ex-WHITE LION singer Mike Tramp says that he has no interest in reuniting with guitarist Vito Bratta.

The Danish-born singer hasn't played with his former songwriting partner and bandmate since WHITE LION performed its last concert in Boston in September 1991.

In the twenty-six years since WHITE LION broke up, Bratta's public profile has been virtually nonexistent, while Tramp has remained active, recording and touring as a solo artist and with the bands FREAK OF NATURE, THE ROCK 'N' ROLL CIRCUZ and, more recently, BAND OF BROTHERS. Tramp also attempted to revive WHITE LION with the 2008 album "Return Of The Pride", featuring new members. Two years later, Tramp ceded ownership of the name WHITE LION to Bratta in an out-of-court settlement.

Although Tramp continues to be asked about a possible WHITE LION reunion in almost every interview, he says that he would not want to resurrect the band that made him famous.

"The thing is that I would not wanna play with Vito Bratta for anything in the world, I wouldn't wanna spend any time with him," Mike told "Rock Talk With Mitch Lafon" (hear audio below). "We have not talked for many, many years. There's nothing to talk about. He has nothing to add to the table, and I will let him rest in peace. Because I don't need him and I will not go back and do that."

He continued: "I'm performing a major amount of WHITE LION songs with the BAND OF BROTHERS in a modern version, and the fans are embracing it because they feel it's real and they understand that this is Mike Tramp up on stage — fifty percent of the WHITE LION songwriting [team] — performing the songs in 2017 his way. And that makes sense. It's not Mike Tramp up there being WHITE LION and stuff like that.

"I have finally gotten to that moment where I really cherish and enjoy playing those songs — it just feels like it's real and it's natural in where we are today," he added. "This is not a rehashed version of a band featuring the bass player and the logo."

Tramp, who is currently promoting a solo box set, "This & That (But A Whole Lot More)", believes that the reason so many people felt a personal connection with WHITE LION's music had to do with the quality of group's songwriting.

"I don't know what was so special [about the musical chemistry between Vito and me], except for when you listen to the songs, of all the bands we were competing against in the '80s, if you can call it that, when you now go back to the catalog and you listen… And the fans will do this, and they will say, 'WHITE LION has its own place,'" he said. "I don't think you can compare WHITE LION to WARRANT or RATT. They have their own place, except for maybe the look and the hair and how we all got boxed together.

"Vito Bratta and Mike Tramp had no friendship together except for [the fact that] we played in the same band," he continued. "We had nothing that we shared except for the songwriting we accomplished when we sat down and looked at each other, like almost two chess players or something like that. But when that song was written, Vito went home and I went out into the real world and shared my life with people — [whether] it was riding my Harley, playing baseball… whatever it was. So we had nothing, absolutely nothing in common except for we knew when we had written a great song."