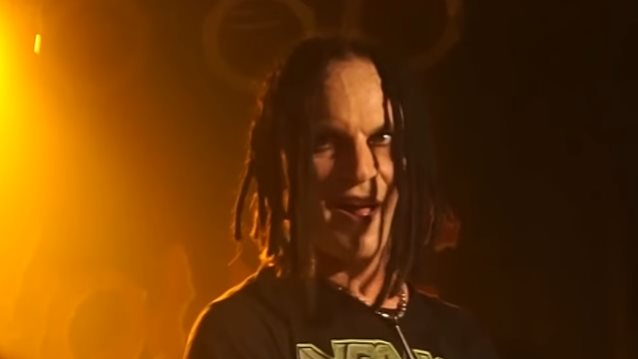 Ex-STATIC-X and DOPE guitarist Tripp Eisen has broken his silence for the first time since serving time in prison for sexually assaulting an underage girl.

Eisen — whose real name is Tod Rex Salvador — was arrested in Orange County, California in late February 2005. The then-39-year-old musician allegedly met a 14-year-old Sayreville, New Jersey girl on the Internet, drove from Pennsylvania on January 7, 2005 to meet her, and assaulted her in a shopping center in Old Bridge, New Jersey. The girl's mother found out about the incident and alerted police.

In a separate incident, Eisen was arrested on February 10, 2005 on one felony count of crimes against children. Authorities from the Orange County (California) Sheriff's Department found the musician sleeping in a parked car with an underage female with whom he'd just had sexual intercourse, according to Bergen, New Jersey's The Record.

Eisen accepted a plea bargain in California for "having oral sex with a person younger than fourteen years old and more than ten years younger than him," stemming from the Orange County arrest. He was paroled from the Mid-State Correctional Facility and was released from custody on April 17, 2007 after serving time for the January 2005 incident. A year and a half later — in December 2008 — Eisen was returned to prison on a parole violation and was released again the following year.

In his first interview in more than a decade, Eisen talked to Totally Driven Radio about his arrest, his exit from STATIC-X and his relationship with his former bandmate, late STATIC-X frontman Wayne Static (hear audio below). A few excerpts from the chat follow below (transcribed by BLABBERMOUTH.NET).

On his departure from STATIC-X:

Tripp: "Well, my exit from the band was tragic, and that caused a lot of rift between me and Wayne. At first, he was supportive of me — when I got arrested, he was supportive at first — and it got to be too much. The pressures all came down, and I don't blame him for anything. It was a difficult time, a very difficult time, and I feel bad for any injury I caused the band. [It was] definitely. But I respect Wayne a lot and how he dealt with everything. How he dealt with everything, I feel like he did the best he could. It was a tough situation. But it was a difficult time of my life, and I've learned from it, and I feel I've grown. What happened to me was really bad judgment, terrible mistakes that I made, and I paid a price for 'em. So I felt like when I exited the band, they had to go on, I was happy to see it go on and recover from that and do some really good albums after that."

On his arrest and subsequent release from prison:

Tripp: "There were two cases [involving two separate girls]. I had to deal with both things. And I got through it. Yeah, there was two cases. People can… It's been out there. It's been so long ago. That's why it's kind of hard to talk about it. But I'm here, I'm alive, I'm well, I survived it, and the fact that… It was difficult. But I've grown. It's been ten years. I've written a lot of music in the interim. I've grown a lot since then. I reconnected with a lot of former friends, partners in the industry, different people I've worked with. I've been rebuilding some of my relationships with people, and it's been a blessing. I feel grateful for all the people that stuck by me. Sometimes it's hard to mend relationships, especially with a lot of the press I got — [it was] very hurtful and stuff — but I understand it; I understand where people come from."

On reconnecting with musicians he was friends with or that he played with prior to this arrest:

Tripp: "I was just hanging out with [former STATIC-X bassist] Tony [Campos] the other night — who's playing with CAVALERA CONSPIRACY — so I was out hanging out with him the other night in New York City. It was great to see him. They did a sold-out show at the Gramercy Theatre. So I go out and I hang out, I see people and I've been getting a lot of positive reactions. Sometimes it's awkward, but most of the time it's really nice to see people, it's really nice to see people again."

On whether he's had any particularly uncomfortable encounters with people since his release from prison:

Tripp: "No. I haven't had much negativity. Obviously, I'm self-conscious — you wonder what people are thinking — but for the most part… When I go back to when I was touring and I was in a band, I felt awkward back then sometimes; I've always felt awkward in situations with fame and how you deal with people. I mean, a lot of times… STATIC-X [was] a pretty big band, but there's always a band bigger. There's always six or seven other bands on tour that are bigger, that you show deference to them and respect, and it humbles you. Touring with KORN and LINKIN PARK and all these bands that are way bigger, you show the respect that they deserve, and it makes you humble, because you can't get too full of yourself. So I've always felt awkward. I'm out now going to see bands. I still have a lot of friends in the industry, so I get into shows, I'm hanging out backstage, and here I am. And people are pretty cool to me. I really haven't had anything awkward. And even when there is something awkward, I'm, like, 'Wait a minute.' I've been in situations when I was out on tour and then I'd go see bands, and I felt awkward walking around backstage — even before all this happened. So I kind of try to give people the benefit of the doubt: 'Am I reading too much into things?' So I really haven't had… I can't think of any negative experience as far as seeing people face to face — unless they're just being nice to me or whatever. But people have been pretty cool. And I'm grateful for that."

On feeling like his world was falling apart when he was arrested in 2005:

Tripp: "I felt like I lost everything. A lot of people have an earth-shaking or a life-changing event in their life, and if you lose everything, you can survive it, you can bounce back, you can grow. And I'm not gonna even say I lost everything, 'cause there's people that stuck by me. I had my family [that] was very supportive, and there's people that stuck by me. There's friends that came out of the woodwork — people I was just acquainted with, all of a sudden they're sending me letters [being] very supportive. Some people shied away, and then when I got out, I mended those friendships or re-established those friendships. It's awkward, but I think that you can bounce back. It's something that you can be inspirational. And I was inspired by a lot of people that have overcome even greater odds than I have. I'm here, I'm alive, I have music to play. My art is important to me. I've written songs. I've never given up hope. If I never was successful in music again, I have to be okay with that. But I feel like I've got something to say. I've got music I'm writing, I'm collaborating with people, writing lyrics, writing music, so…"

On bouncing back from his ordeal:

Tripp: "Yeah, it was like jumping off a cliff and you can't turn back; you know, you lose something. I sit there and I calculate all the things I wish I could have done. I wish I could have done the [STATIC-X] 'Start A War' tour and finished up… I love the songs on that album. And it's terrible. Just the fact that Wayne is gone and I don't have an opportunity to see him and ever collaborate with him again, 'cause that was the best time of my life. He was a pleasure to work with; he was like a songwriting partner from heaven. It was just awesome. And the fact that he's gone off this earth. I mean, I've been through the wringer, and I'm here alive, and I wanna still play music and give the world some part of me that I still have. The fact that he's not here, all the wonderful things he's done and written and all the amazing music he's written, it's sad. It really devastated me when I heard that he passed. Especially the way he went. It's sad. We lose too many people to drugs. I mean, I've always been a proponent — no drugs, no alcohol, no tobacco. I've always been kind of straight edge. And I was shocked to hear Wayne even went down that path, 'cause that wasn't the Wayne that I knew. So it was very sad. Everybody makes mistakes. And it's a matter of how you overcome them. And it humbles you, and how you grow from them and how you change your life and make sure never to make those mistakes again. And, unfortunately, Wayne doesn't have that opportunity, and he deserves that, 'cause he was such a good person. Everyone that knows him and knew him, through the industry or fans, know what a great guy he was."

On taking his time in returning to the music scene:

Tripp: "I kind of didn't push myself right away. I just played music, I wrote songs, and I said, 'In due time, I'll meet musicians to play with and get back out there.' So I feel like… Yeah, I'm biding my time, and at the right time it'll happen. I'm gonna be desperate or anything like that. When it's right, it's just gonna come about — the right projects or whatever. And in the meantime, through the years, especially the last four years, I've had opportunities, I've had some auditions, and I've been just waiting for the right project, the right circumstances to come through. But I've had some opportunities, and I've been working on things, and people that I worked with and collaborated with. I'm not gonna name names right now, I have done some things."

Eisen rejoined his former bandmates in ROUGHHOUSE (formerly TEEZE) on stage last October at the Savfest at Whiskey Tango in Philadelphia, Pennsylvania. The concert was a benefit for people suffering from depression and mental health issues, raising suicide awareness and showing support for those who have lost a loved one to depression and suicide.