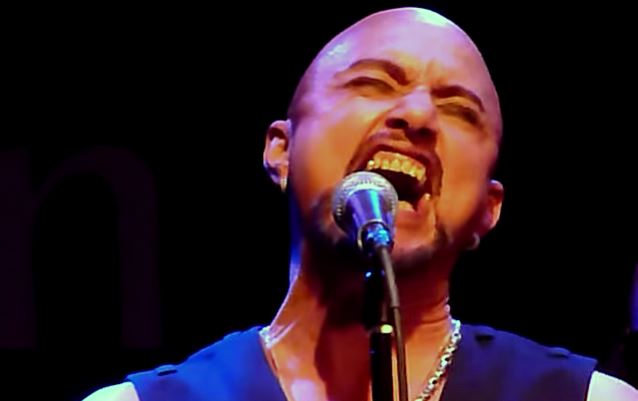 In a brand new interview with GoUpstate.com, ex-QUEENSRŸCHE singer Geoff Tate admitted that he is still perplexed as to why his former bandmates fired him in June 2012, a move which instigated lawsuits over the dismissal and sparked a protracted legal fight over the rights to the QUEENSRŸCHE name.

"I didn't see it coming. I didn't even think it was possible," Tate said. "Why would you fire the main writer? Why would you do that — and the person who is the face of the band and is the identifying key figure in the success of the group? I don't mean that to sound egotistical, because it's not. It's just the truth. Why on earth would you do that? It sounds like career suicide, especially at our ages. We're all in our 50s, for God's sake. Why would you break apart this successful thing at this point in life?"

QUEENSRŸCHE members Scott Rockenfield (drums), Eddie Jackson (bass) and Michael Wilton (guitar) claim that they legitimately gave Tate his walking papers due to a pre-show incident at a concert in Brazil where, after learning the three had fired Geoff's wife Susan, who had been managing the band for the past several years, and his stepdaughter (another band employee), Tate punched Rockenfield and Wilton, attempted to go after Jackson and spit on the band throughout the ensuing performance.

"We tried multiple times [to sit down and talk face to face] before it got to the point of making the transition," Rockenfield said during a 2013 appearance on "That Metal Show". "We tried on multiple occasions to have meetings. And even during that process, Geoff was the first one to hire an attorney and then start corresponding with us about these meetings through an attorney."

He continued: "It's kind of live a divorce; when you go through a divorce, it doesn't just go, 'Wow, I don't like you anymore. Here's the big 'D' papers.' You kind of go through things and deal with things and then they start to build and become to a point where you've gotta address them.

"The last meeting that we actually did have was in Brazil, and we had to play that show, which was on April 14 of 2012. We had a meeting just prior to the gig in the dressing room. And, you know, we got through the meeting — it wasn't the best meeting, but we got through it — and then two hours after that, going on stage, the result of that meeting is what everybody probably knows about on the Internet."

Rockenfield recently told Pop-Break.com that the decision to fire Tate was not made overnight. "The conflict started years ago, but prior to it, when we were all still working together in the 'old band,' so to speak… we had been in a dark place for a long time," he said. "It wasn't going well, the years were stacking up on us, we weren't making the music that we were passionate about and were being forced to do a lot of things that we didn't want to do. We weren't being allowed to play all of the music that we wanted to play live, and to give our fans what we thought was important. The darker the hole we kept falling into, the faster we wanted to get out of it. That's what happens, you kind of hit the bottom of a hole, and there's only one way to go: up and out of there."

He continued: "I guess my point with all of that is rolling forward to the present right now and what we've had to go through the past couple of years… it was a huge defining moment, you know? In the end, it was exactly what we needed to do and now we just feel so good about where we're at. It was meant to be; it was the right decision. We're happier, the fans are happier, they're certainly enjoying the music we play live, and have certainly given us great feedback on the record we put out last year. So overall, everything worked out really well. The morale, for us, just kind of became perfect. I mean, the second we transitioned and got Todd [La Torre, vocals] in the band, the morale just went through the roof for us, you know? There was no weird dark clouds for us, and we just don't have that anymore. We're really close to each other. We have the same common interests, we're energetic, and we're happy! We're all working together as a team, and it's not just one person saying, 'you have to do it like this,' it's all of us making the decisions together and making the music together.

"Long story short: the morale is really high, we're having a great time, and we all really know what we want to do and why we want to do it. I think that's why the fans like what we're doing now — they can see that we're happy and that we're being honest again."