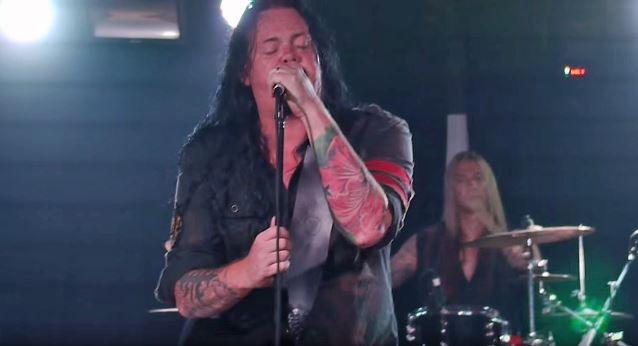 Fan-filmed video footage of EVERGREY's September 3 performance at Marlin Room at Webster Hall in New York City can be seen below.

EVERGREY's latest album, "Hymns For The Broken", was released in September 2014 via AFM Records. The CD was recorded at a few different studios and mixed at Hansen studios in Ribe, Denmark by Jacob Hansen (VOLBEAT, AMARANTHE, EPYSODE, PRETTY MAIDS, DORO).

EVERGREY's current lineup includes guitarist Henrik Danhage and drummer Jonas Ekdahl, who have rejoined the band four years after leaving the group in 2010.

Not too long ago EVERGREY was almost dead. It wasn't a decision Englund had spent hours or weeks brooding over, but as time passed following the band's "Glorious Collision" album from 2011 he felt less and less inspired to continue. Perhaps it was the splintering of the band lineup in 2010 — which saw Henrik Danhage (guitars), Jonas Ekdahl (drums), and Jari Kainulainen (bass) leave on friendly terms — or maybe it was the business side of the music that had worn him down, but Englund had seriously considered throwing in the towel. Fate had other plans, however, and he found himself working alongside his former bandmates due to circumstances beyond his control. The end result of that unplanned collaboration, which was meant to be temporary, resulted in a re-energized EVERGREY creating "Hymns For The Broken", arguably the strongest album in the band's 20-year career.

"We needed a stand-in drummer for a few shows that had already been booked," Englund explains, "because Hannes [Van Dahl] had been offered the chance to join SABATON, so I naturally called Jonas to see if he was available. We also needed a second guitarist, so I asked Henrik and he was fine with it. While we were doing those shows, we realized that we were having a lot of fun with the music again."

"I'd say that the guys coming back saved EVERGREY because I wasn't 100% set on doing an album," Englund admits. "And I'm amazed. The band sounds hungry, the album sounds awesome, and I can say there's not a weak song on it. I like it a lot, which is strange because usually I'm so tired of the music after working on an album for such a long time. Honestly, I've never felt I've been as close to the music as I am with 'Hymns For The Broken' because all the bits and pieces are in there. It's exactly what my vision for the album was. Usually you get about 80% of it right, but this is 100% what we wanted."