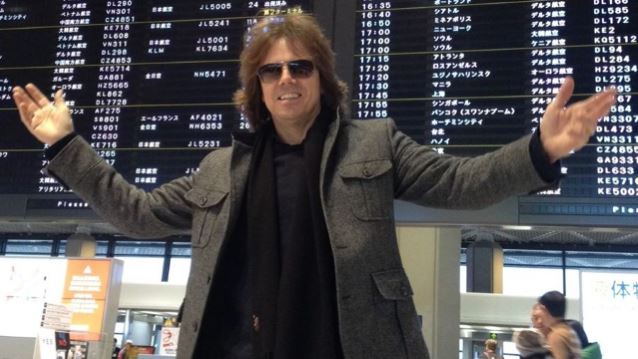 On February 3, vocalist Joey Tempest of Swedish hard rockers EUROPE took part in a press conference at the Hard Rock Café in Paris, France. You can now watch video footage of the question-and-answer session below.

Asked if it's still fun to be a professional musician today, and what he thinks about music downloading and streaming, Tempest said: "It's fun for us, because the last three albums, 'Last Look At Eden' (2009), 'Bag Of Bones' (2012) and 'War Of Kings' (2015) now, it's amazing for us. We're having fun right now — we're creative and we're doing good albums. But the business has changed."

He continued: "I'm not too fond of streaming. I would, actually, prefer if all releases had three months without streaming, so people can enjoy their albums, enjoy their CDs, and then maybe we can have streaming. But, I mean… The business has changed, and everything is changing fast, and we want to adapt, and we do. We love working the social media in the band EUROPE.

"We used to have a management in San Francisco that collected all the thousands of letters for EUROPE, and we couldn't go there and read them all. Now we put a post on Facebook and we see what people think and what they feel about music and what we're doing; it's amazing. So there are positive things about coming so close to the fans, to know what they think and what they like and stuff. So you have to roll with it. You can't just say, 'I don't like the business now. I'm gonna stop.'"

Tempest added: "A lot of bands, a few years ago, said, 'We're not gonna make any more albums,' but they all have started making albums again. It is changing slightly. People realize that albums are important. If you don't make new albums, people are gonna automatically listen to your old stuff and you won't progress, and it will be a nostalgia thing. So you always need to be pushing for new stuff. Videos and albums are still important."