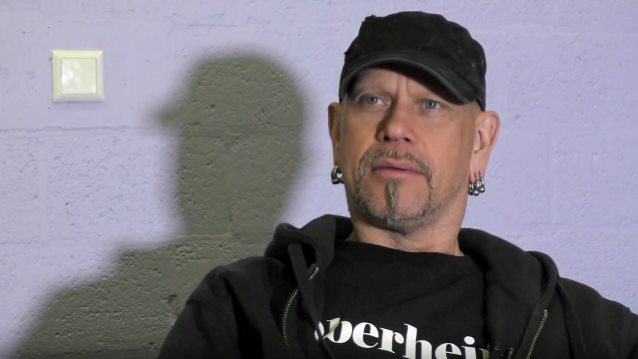 Holland's FaceCulture recently conducted an interview with drummer Ian Haugland of Swedish hard rockers EUROPE. You can now watch the chat in three parts below.

Speaking about the EUROPE songwriting process, Haugland said: "What we try with every new album is to actually not repeat [ourselves], but to look at the back catalog and [go], 'Okay, we did on that album, so maybe we'll go crazy about something else.' So that's good. And it's like having an art gallery with different pictures you can look at, and you get different feelings from different pictures. So I think the next EUROPE album is gonna be probably a bit different from [2015's] 'War Of Kings', I guess."

Asked what he has noticed about the direction of the material EUROPE has written for the follow-up to "War Of Kings", Haugland said: "I haven't noticed anything, because I haven't heard anything. [Laughs] the thing is, I know that for Joey [Tempest, EUROPE singer], for instance, he creates a lot of music in his mind before it ends up on tape so you can hear it. So I'm sure he has a lot of song ideas in his mind. I also know that John Levén [EUROPE bassist], he has a couple of really cool riffs; he played it to me. And the same with Mic Michaeli [EUROPE keyboardist]; he's got a lot of song ideas. Actually, after Christmas, we're gonna start rehearsing the songs and go into the studio on February 1st."

Regarding a possible release date for EUROPE's next album, Haugland said: "It's gonna be released sometime after next summer. So it's gonna be an autumn release — probably in September, I would say."