Swedish hard rockers EUROPE have finished recording their new album for an October release. The follow-up to 2015's "War Of Kings" was laid down at London, England's legendary Abbey Road studios and was produced by Dave Cobb, who also helmed the band's last disc.

Says EUROPE: "[The new album] turned out so much more exciting than we expected!

"The vibe in this studio is great! The staff and facilities are out of this world.

"Of course, we couldn't resist having some fun with vintage equipment and amazing recording techniques.

"The album is due out in October, with one or two tracks coming your way ahead of release. Meanwhile, we're getting ready to hit the road again for our 'Electric Summer Tour 2017'. Looking forward to seeing you all out there!"

EUROPE drummer Ian Haugland told FaceCulture last November about the band's songwriting process: "What we try with every new album is to actually not repeat [ourselves], but to look at the back catalog and [go], 'Okay, we did on that album, so maybe we'll go crazy about something else.' So that's good. And it's like having an art gallery with different pictures you can look at, and you get different feelings from different pictures. So I think the next EUROPE album is gonna be probably a bit different from 'War Of Kings', I guess."

EUROPE last year completed a short European tour during which the band played "The Final Countdown" album in its entirety to celebrate the LP's 30th anniversary.

We have just finished the recording for our new album at the legendary Abbey Road Studios! 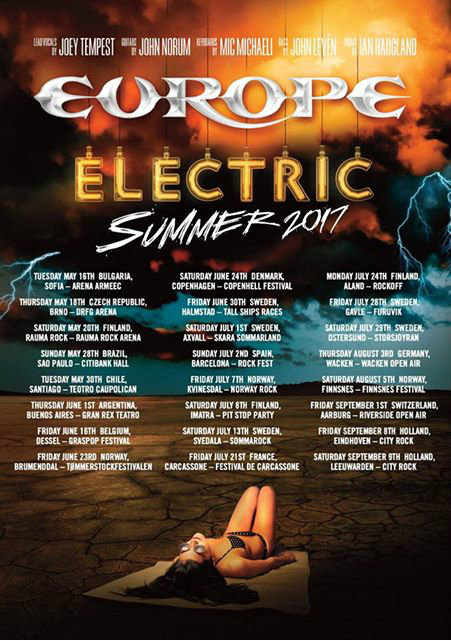