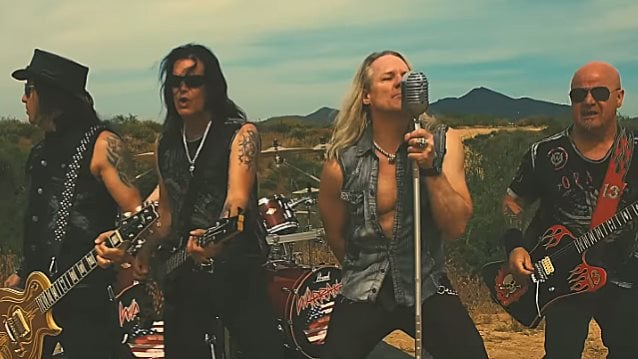 Josh Rundquist of That Drummer Guy recently conducted an interview with WARRANT guitarist Erik Turner. You can listen to the full chat below. A few excerpts follow (transcribed by BLABBERMOUTH.NET).

Erik: "I think we're wearing our influences on our sleeves more than ever with this new record. To me, to my ears, the difference between 'Rockaholic' [2011] and this new record is 'Rockaholic' is a lot of production, and really polished and clean, but still a lot of great songs. We're very proud of that record. But this record seems to be a little more analog-sounding, more organic, a little more rough around the edges. When we were 12, 13, 14 years old, we were listening to BAD COMPANY and [LED] ZEPPELIN, and AEROSMITH and bands like that, and I think this record has a little bit more of that sound, that '70s classic rock sound that we grew up [on]. That's the music that inspired us to want to be in a band and do what we do today. It all came out for some reason on this 'Louder Harder Faster' CD."

On the songwriting process for "Louder Harder Faster":

Erik: "[Laughs] Jerry [Dixon, bass] and Robert [Mason, vocals] wrote the record, pretty much all of it. I co-wrote one song. A friend of Robert's co-wrote one song with him as well, but we all contributed, we were all sending riffs and Joey [Allen, guitar] and I sent a bunch of riffs out, but the two guys are really good at writing lyrics and melodies, which is what songwriting is all about, is Jerry and Robert and they did great on this record, in my humble opinion. They should be very proud."

On making music videos in the Internet age:

Erik: "It's different times and YouTube's a big thing and it's a big way for us to market our band and do something artistically and visually and not just musically that hopefully complements the music. Everything about the music business is different now. Making this video, I was sick, just getting over a cold. I still had remnants of a cold. [Laughs] It was a long day, a very long day. We had fun."

On what's next for WARRANT:

Erik: "We tour year round. That's what we do. We play 50 shows a year, so we'll continue to do that. The only big difference will be is we'll be promoting and playing some of the new music from the record. All of our staging, backdrops, drumheads, everything, will have the new artwork from the new CD. We'll have new t-shirts to go along with the CD to promote it. We'll be selling the CD at our shows. We'll promote it every which way we can at local radio stations and whatnot."

On the "diversity" of WARRANT's catalog:

Erik: "We're fans of CHEAP TRICK and we're fans of ACCEPT. We love BLACK SABBATH and we love QUEEN. I guess that kinda comes out in the eight original albums that we've done is that you'll hear that we love a great ballad. We love a good pop song. Who doesn't love JOURNEY? We love a lot of their music. I think those influences just come out naturally. Those bands that I mentioned, a lot of them, a band like QUEEN has real heavy, hard songs and then have some of the most beautiful, melodic things you've ever heard in your life. Same with ZEPPELIN and stuff like that. I'm not comparing ourselves to those bands, but those bands we definitely admire and look up to and love. They influenced us."

On the fact WARRANT has only released eight studio albums in a career that spans over 30 years:

Erik: "Songwriting and all that doesn't come easy for us, for whatever reason. When it does, when we do get down to business and we do make it happen, it usually turns out pretty good, at least good enough for us to be real proud of it."

"Louder Harder Faster" will be released on May 12 via Frontiers Music Srl. The disc was recorded with producer Jeff Pilson, a veteran bassist who has played with DIO, FOREIGNER, DOKKEN and T&N, among others, and was mixed by Pat Regan except for the song "I Think I'll Just Stay Here And Drink", which was mixed by Chris "The Wizard" Collier (FLOTSAM AND JETSAM, PRONG, LAST IN LINE).