Dutch female-fronted symphonic metallers EPICA have launched a tour diary from their latest North American headlining trek (featuring support from THREAT SIGNAL and BLACKGUARD) exclusively at www.sounds2move.de. The band will be posting frequent blogs on the site with the latest news from on the road as well as photos. The first post is already online, done by drummer Ariën van Weesenbeek. Check it out at this location.

EPICA's latest album, "Design Your Universe", landed at position No. 12 on the Top New Artist Albums (Heatseekers) chart, which lists the best-selling albums by new and developing artists, defined as those who have never appeared in the Top 100 of The Billboard 200.

"Design Your Universe" was released in Europe on October 16, 2009. The follow-up to 2007's "The Divine Conspiracy" was recorded at Gate Studio in Wolfsburg, Germany with producer Sascha Paeth.

Fan-filmed video footage of EPICA's January 27, 2010 performance in Philadelphia, Pennsylvania can be viewed below. 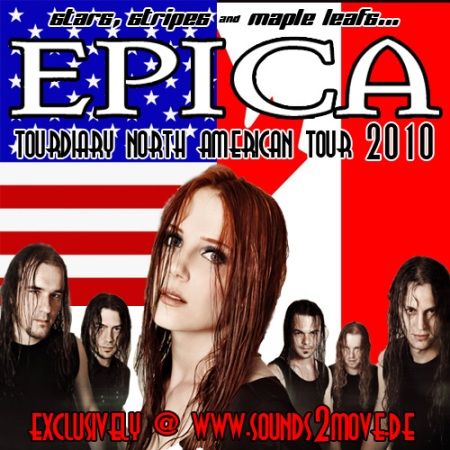