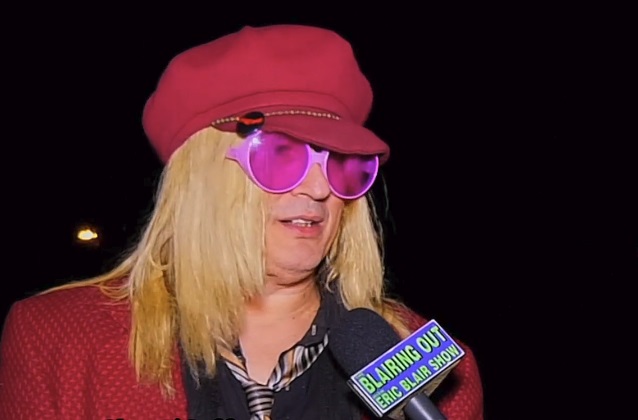 ENUFF Z'NUFF vocalist/bassist Chip Z'Nuff was interviewed by Eric Blair of "The Blairing Out With Eric Blair Show" at Frontiers Music Srl's "Rockin' Christmas Bash", which was held on December 2 at the Canyon Club in Agoura Hills, California. The full chat can be seen below. A few excerpts follow (as transcribed by BLABBERMOUTH.NET):

On how ENUFF Z'NUFF ended up signing with Frontiers:

Chip: "They said, 'We're interested in the record,' and I gave them something I thought was strong — an archival record featuring the band as we are now today and how we were years ago, and it did very well for them, and they said, 'Let's move the relationship forward.' Frontiers is great — great people over there. They're real rock fans; they believe in the bands; they believe in this kind of music; and I'm grateful I have a home where we can put music out every single year and go out and celebrate and tour and bring it to the masses. To be with a label like Frontiers that has bands like JOURNEY and WHITESNAKE and Sebastian Bach, it's a wonderful conglomeration of artists out there, and I'm grateful that we can fit in there somewhere."

On the group's forthcoming album, and whether it will have a "psychedelic feel":

Chip: "You are what you eat. I grew up listening to THE BEATLES and QUEEN and MOTT THE HOOPLE and CHEAP TRICK and old WHO — very diversified music. I've always really catered to the English stuff — ZEPPELIN, PINK FLOYD — but there's so much out there to grab on to. We really haven't changed very much. I think the sounds are still strong, and the band looks good, and we play well every single night. We just want to go out there and give a great performance and leave an indelible mark in every single town we go to.

"It's an autobiographical record [with] songs that are about the experiences that we went through, and maybe you have as well. I'm not going to give a title out or anything. The record will be out sometime next year — April, May, June, whenever Frontiers wants to put it out. It will be accompanied by videos, and we'll be out on tour supporting it the whole time."

On how the rock world has changed since the band first came up:

Chip: "The advent of the internet, it's opened up a lot of doors for people and it's closed a lot of doors as well. I think that bands have to get back to the old guerrilla marketing campaign. We have to go out there and play shows all the time and continually work, put videos out. I think we're in a day and age now where [if] you put a 10- or 11-song record out, you need to do 10 or 11 videos. I really believe that, and you've got to go to the street. You have to play and get in every single town. That's the only way it's going to happen for you. You want to get out there and play to the people out there that have supported you from the beginning. The old days of an ounce of cocaine and tons of cocktails and promiscuity, that's died down a little bit, I think. It's wide open right now — we're in a time where there's too much product and not enough demand. You've got to make it happen for yourself. You've got to be hungry, and you've got to want to play. This business is predicated on friendships and relationships. You've got to get out there and play the shows, meet the people, hang out with everybody, do all the interviews, and then you've got a chance."

On keeping a positive attitude:

Chip: "I'm all about peace and love. Life is too short to hold grudges. I'm just going to move forward and have a good vibe and be grateful that I'm here right now."

On how he maintains his sobriety on the road:

Chip: "Very carefully. I never really fell into drugs or anything, although I've smoked more pot than [Colombian drug lord] Pablo Escobar. I've been very good about keeping it focused, and singing every single night, there's no room for error. I look at alcohol like a fighter bomber coming in and trying to wreck my life. I stay away from the booze as much as I can, and I've never really gotten into drugs, and what did my mom used to always say to me? 'Don't say no; say no thank you.' Let's not offend the people that still want to party."

Chip: "I met [him] in 1989. Dee Snider from TWISTED SISTER's brother Mark was a radio guy over at Atco Records, our label, and he was kind enough to come up to me one day and say, 'Chip, I got this friend. I think you guys will really hit it off well. I want to bring you down to his station. His name is Howard Stern.' I said, 'Sure, I'd like to go.' It was the early days of ENUFF Z'NUFF's career. I went down there and he had me at hello. Wonderful personality, big fan of music. He just loves everything about what we do. He grabbed onto the band, and he's always been there from day one. He's never turned his back on us. Every single record, we go into the studio, we hang out there, we play songs for him. He's a rock star, even though he doesn't play. I love what he does for everybody out there. He helps a ton of bands out there. He's a real proponent of pushing good rock n' roll music, and I'm grateful to call him a friend."

ENUFF Z'NUFF's most recent album, "Clowns Lounge", was released by Frontiers last December. The record is a collection of rarities and early demos that have been reworked and re-recorded by the band. This exceptional collection also features a guest appearance from the late Jani Lane (WARRANT) as well as an appearance from James Young of STYX.