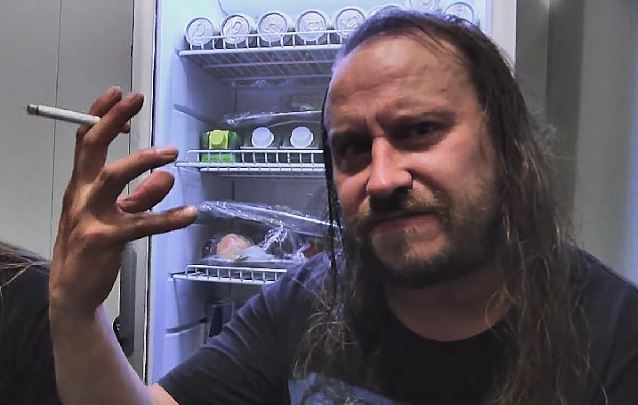 "[We played some shows with KING DIAMOND] a couple of years ago," he said. "But, I mean, we did about six weeks [with KING DIAMOND and ENTOMBED] in the States [in 2003]. And they are the greatest guys. [They] still are. I saw them two weeks ago in Sweden. Afterwards, we went to the hotel and King Diamond himself came unmasked down and had a beer with us."

Asked if King Diamond is as "scary" in person as he appears to be on stage, Petrov said: "He's a nice guy, but he's really… There's some aura around it that you respect. You treat him with respect, because he's done so much, and to meet him in person is… I've done it before [on] tour and stuff, but your knees get weak and you get nervous, and that's a good feeling when you get that from somebody."

Regarding whether hanging out with King Diamond was his biggest "fanboy" moment, Petrov said: "Yes, actually. I can't find another feeling with somebody else. I mean, I had a bottle of wine with 'Fast' Eddie Clarke from MOTÖRHEAD at Ozzfest, and Ozzy [Osbourne] walked by trying to find something somewhere, but I didn't get that feeling. But when King Diamond came, [I got it]."