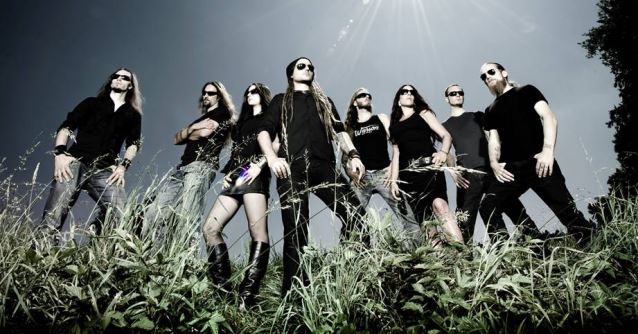 Swiss folk metallers ELUVEITIE have commenced work on the material for their new album for a 2014 release.

Over a year has passed since the the band's latest CD, "Helvetios", was made available via Nuclear Blast.

The upcoming weeks will see the eight musicians play the final shows of their "Helvetios World Tour", after having traveled around the globe for 20 months. Following the completion of the trek, ELUVEITIE will take a break from playing live, with the exception of taking part in this year's "Eluveitie & Friends Festival".

Commented the band: "Keep your eyes and ears open! You can expect more news on this soon!"

"Helvetios" was released in Europe on February 10, 2012 via Nuclear Blast RecordsNew Sound Studio in Pfäffikon, a municipality in the canton of Zurich in Switzerland, with producer Tommy Vetterli (a.k.a. Tommy T. Baron; CORONER/ex-KREATOR guitarist). According to the band, Vetterli "record[ed] drums, guitars and vocals and also produc[ed] and mix[ed] the record. Most folk instruments and also vocals [were] recorded by Anna Murphy and Marco Jencarelli at the Soundfarm studios in Lucerne."