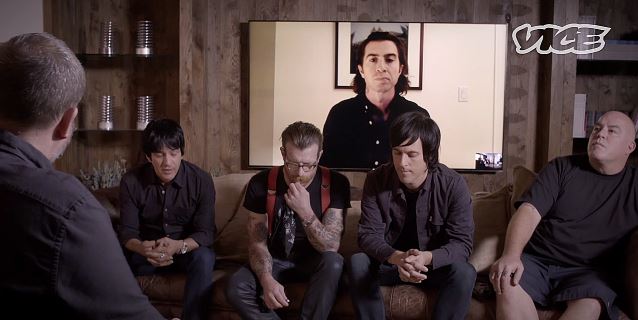 EAGLES OF DEATH METAL — who were thrust into the headlines on November 13 when a mass shooting at the band's Paris concert left nearly 100 people dead — sat down for an on-camera interview with VICE to speak about the tragedy. Co-founder Jesse Hughes, as well touring members guitarist Eden Galindo, bassist Matt McJunkins, and drummer Julian Dorio, recounted to VICE founder Shane Smith the harrowing incident in excruciating details. You can now watch the full chat below.

EAGLES OF DEATH METAL last week announced that all of their future shows are on hold and issued their first official statement following the events of November 13, when more than 129 people were killed in seven coordinated terrorist attacks.

The greatest number of deaths took place at the Bataclan, where EAGLES OF DEATH METAL were performing when terrorists began a siege that ended with 89 people in the club either shot to death or killed in explosions.

Hughes said the band will continue to exist, and even hopes to be the first band to play the Bataclan when it opens. "I cannot wait to get back to Paris… Our friends went there to see rock 'n' roll and died, Im going to go back there and live," he said.

The attacks in Paris led to a military response by France against the radical Islamic organization ISIS, as French jets bombed a series of targets in Syria.

The attacks have stepped up worldwide concern over ISIS, as well as a debate in the U.S. over whether to accept Syrian refugees.

EAGLES OF DEATH METAL was founded in 1998 by QUEENS OF THE STONE AGE mainman Josh Homme and his longtime friend Jesse Hughes. Homme appears on all the band's albums but only plays live with them occasionally. He was not in Paris at the time of the attacks.

The band's most recent album, "Zipper Down", was released in October and entered at No. 59 on The Billboard 200 album chart. The first single is called "Complexity".