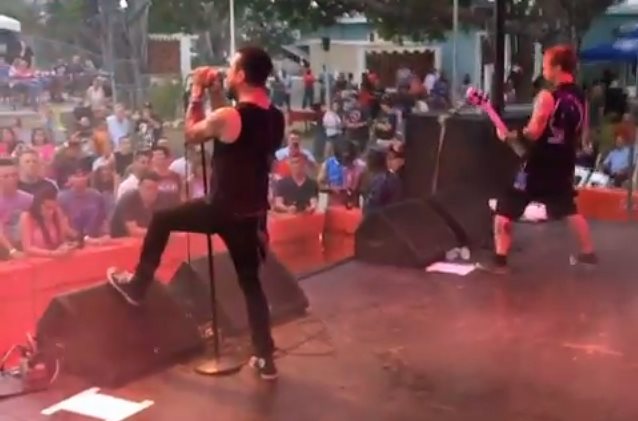 DROWNING POOL performed at this year's 4th of July "Freedom Fest" at Guantánamo Bay, Cuba. The Texas heavy rockers' appearance at the event was notable because their music was once used to interrogate detainees at the the American wartime prison located within Guantánamo Bay Naval Base.

DROWNING POOL's song "Bodies" was used as a tool of torture at Guantánamo Bay in 2003 when it was played repeatedly to "stress" detainee Mohamedou Ould Slahi. The track, which mostly consists of the repeated lines of the main chorus, "Let the bodies hit the floor," has also been a battlefield anthem for U.S. troops and professional wrestlers and fighters.

DROWNING POOL previously performed at Guantánamo Bay in 2009, but their appearance at the U.S. naval base didn't draw any attention at the time from the mainstream media.

A November 2008 report by the Senate Armed Services Committee into the treatment of detainees in U.S. custody revealed that prisoners at at Guantánamo Bay had been tortured by songs such as "Bodies" and METALLICA's "Enter Sandman".

Over a ten-day period in July 2003, Slahi was questioned by an interrogator called "Mr. X" while being "exposed to variable lighting patterns" and repeated playing of "Bodies".

Col. Lisa Garcia, a spokeswoman for the Southern Command, which oversees Guantánamo, told the Miami Herald that the detention center "has nothing to do with what band and when those performances are scheduled."

Bands are scheduled through the Navy's entertainment branch, called the Morale, Welfare and Recreation division and the base itself, Garcia said.

"It is likely that leadership was not informed of the potential for negative connotations because individuals were more familiar with the song 'Let the bodies hit the floor' than the name of the band that performed it or its past history with detainees," Garcia wrote to HuffPost in a separate e-mail.

Slahi, who was freed after 14 years in October 2016 and returned to his native Mauritania without charges, told the Miami Herald that his experience with music during his detention was "twisted on so many levels."

"Music is supposed to make you happy and make you a better person; sometimes," he said, adding that it was "quite the coincidence" that the band, and their signature song, were on hand for the festivities at the naval station.

In a 2009 interview with the Las Vegas Review-Journal, DROWNING POOL guitarist C.J. Pierce described the band's experience of playing Guantánamo Bay for the first time. "It's actually a really nice base," he said. "I mean, it's right there by the bay. Everybody was real professional. All the commanders and everybody were real down to earth.

"I know they say a lot of bad [stuff] goes on there. We didn't see anything like that. It's not like they're a bunch of gun-wielding people who are ready to just kill somebody."

Asked specifically about torture at the base, Pierce said: "We're at war. And that's part of war. A lot of people forget how those guys (al-Qaida) captured our dudes and videotaped them, and they cut their freakin' heads off and sent the videotapes to us.

"Because they [U.S. soldiers] are trying to get some information out of them [prisoners], and it's war, you're gonna have a little torture. At least we didn't cut their [expletive] heads off and videotape it and send it to their families. I mean, it could be a lot worse."

In 2011, DROWNING POOL lamented the use of its song to inspire a gunman who carried out shootings in Tucson, Arizona which left six people dead.

The shooter had an unofficial video featuring "Bodies" playing in the background while a masked man burned the American flag listed as a favorite on his YouTube channel, leading some media commentators to speculate over whether the killer was influenced by the song.

In a statement posted on the band's web site, DROWNING POOL said: "We were devastated to learn of the tragic events that occurred in Arizona and that our music has been misinterpreted, again.

"'Bodies' was written about the brotherhood of the mosh pit and the respect people have for each other in the pit. If you push others down, you have to pick them back up. It was never about violence. It's about a certain amount of respect and a code."

The statement added: "For someone to put out a video misinterpreting a song about a mosh pit as fuel for a violent act shows just how sick they really are."

This was not the first time "Bodies" had been linked with an act of violence. According to the Washington Post, the DROWNING POOL song served as the soundtrack to a double murder in Oakton, where in 2003, then-19-year-old Joshua Cooke cranked the tune on his headphones, walked out of his bedroom holding a 12-gauge shotgun and killed his parents.

DROWNING POOL's most recent performance at Guantánamo Bay was the band's first at the naval base with vocalist Joey Duenas, who appears to have replaced the group's singer of the past five years, Jasen Moreno.

Duenas, formerly of the bands UNLOCO and ANEW REVOLUTION, made his live debut with DROWNING POOL on April 21 at the Rivers And Spires Festival in downtown Clarksville, Tennessee.

DROWNING POOL has not yet publicly commented on its latest singer change.