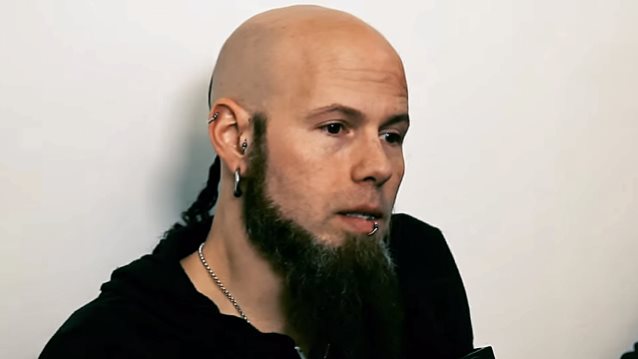 On January 27, Rustyn Rose of Metalholic.com conducted an interview with guitarist C.J. Pierce of Texas heavy rockers DROWNING POOL. You can now listen to the chat in the YouTube clip below. A couple of excerpts follow (transcribed by BLABBERMOUTH.NET).

Pierce: "[Making] this record, there's never been a more freeing experience. It kind of reflects back to the 'Sinner' record in many ways. We were an unsigned band just doing whatever the hell we wanted to do — playing a bar for free beer on the weekends. We didn't get into this whole system, this whole music business, if you will. So we've been in that. We've been through a lot of ups and downs and singer changes — everybody knows that — and management stuff. Going into this record, we've got a solid lineup. Jasen Moreno [vocals] is our man, and he's gonna continue to be our man. The singer switch is over. And then the same thing label-wise. We signed with a new label, eOne, who are all rock dudes. They told us, 'Make whatever record you wanna make. Say what the hell you wanna say. And give it to us when you're done, man.' So it was just one of those things where we just had all the freedom in the world. We did exactly what the hell we wanted to do. We put out a metal record, and that's what we've got."

On whether performing 2001's "Sinner" album from start to finish on last year's "Sinner Unlucky 13th Anniversary Tour" influenced the musical direction of the new CD:

Pierce: "Most definitely, man. I mean, the writing process is an ongoing thing. I never stop. I don't sit down and [go], 'Okay, time to write.' Some bands do that, but I'm always… If I'm feeling inspired, I pick up the guitar and I start writing music. So some songs, obviously, were coming together throughout the years, but the very final touches in the group of songs were definitely inspired by that. I don't think a lot of bands go back to their first record and really sit down and relearn it, let alone play it every single night. So I was definitely influenced by that time period. I mean, I worked that record fifteen years ago. And a lot of that came through. I think songs like 'By The Blood' and 'Hell To Pay', for example, definitely have that core DROWNING POOL sound. So if you were a fan back then, you're definitely gonna love the new record."

On Jasen Moreno's contributions to "Hellelujuah", being that it's his second album with DROWNING POOL:

Pierce: "We've known Jasen forever, man. He came up on the scene in Dallas. A super-great guy. The band he played in at the time were opening up for DROWNING POOL off and on throughout the years. I think going into that first record, when we finally got Jasen, it was just, like, 'Here we go.' We jumped in. We wrote it in the first three months he was in the band. We went in and recorded it before we even started playing shows together and really got to know each other — like really know each other. I love [2013's] 'Resilience'. I think it's a great record. It's kind of a record of discovering who we are. But now, we definitely know who we are and what we wanna sound like, and it just brought us back to that core sound that we have. Jasen is a singer-songwriter as well, and he's got his own cool set of pipes that he brings to our music, man. So, yeah, things have never been better, man. We're all on the same page. I couldn't be happier with any record."

On all members of DROWNING POOL contributing to the songwriting process on "Hellelujuah":

Pierce: "Yeah, we're all involved a lot more. We all bounce ideas off each other more so than ever, man. Definitely. We just come together on it. It's nice that everybody's on the same page. I think, if anything, the battle's been… We had so many different ideas. It's, like, 'Which ones do we hone in on? Which ones do we put together that work together for this record?' And once we got that down… We nailed it down with [producer] Jason Suecof in Florida, and knocked it out."