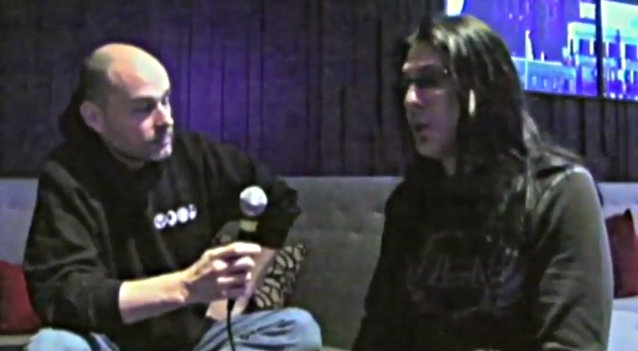 Rock journalist Mitch Lafon conducted an interview with drummer Mike Mangini of progressive metal giants DREAM THEATER before the band's March 21 concert in Montreal, Quebec, Canada. You can now watch the chat below.

DREAM THEATER's latest, self-titled album (available for purchase here) sold around 34,000 copies in the United States in its first week of release to debut at position No. 7 on The Billboard 200 chart. The CD arrived in stores on September 24, 2013 via Roadrunner.

DREAM THEATER's "Along For The Ride" tour picked up on March 20 in Toronto, Ontario, Canada following the band's European tour and then continues through the end of April where it will eventually wrap up in Guadalajara, Mexico on April 26.

DREAM THEATER's spirit of adventure and fearless musical virtuosity continues to reap dividends for the progressive metal titans who recently earned their second Grammy nomination, this time for "Best Metal Performance" for their single "The Enemy Inside" from their current self-titled album. The band — John Petrucci (guitar), John Myung (bass), James LaBrie (vocals), Jordan Rudess (keyboards & continuum) and Mike Mangini (drums) — received its first-ever Grammy nomination in 2012 for "On The Backs Of Angels" (from their "A Dramatic Turn Of Events" album) in the "Best Hard Rock/Metal Performance" category.