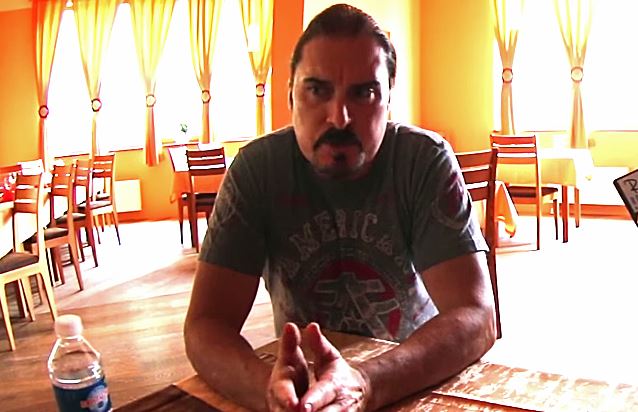 Victoria Purcell of RAMzine.co.uk conducted an interview with vocalist James LaBrie of progressive metallers DREAM THEATER before the band's July 21 performance at MetalDays festival in Tolmin, Slovenia. You can now watch the chat below. A couple of excerpts follow (transcribed by BLABBERMOUTH.NET).

On the shorter songs that were included on DREAM THEATER's 2003 self-titled album:

"Each and every time we go out and we do an album, we just feel that there's something that, necessarily, as any artist would want to achieve, is to be saying something slightly different, but at the same time maintaining, or retaining, your identity musically. With the shorter songs, we just thought… it's always something that we've always experimented in throughout our entire career. With each and every release, there's always some songs that are, evidently, quite shorter than what we've come to be known for, which is slightly longer songs, or epic pieces put together. But with the self-titled album, yeah, there were a few [shorter songs] in there, and as well, there are some absolutely very lengthy songs — 'Illumination Theory' being one of them, [at] over twenty minutes. But that's been what's really been the hallmark of DREAM THEATER — is that we like to incorporate… we like to be very diverse in the way that we compose the music."

On the fact that DREAM THEATER fans still buy physical product from the band:

"We've been very, very fortunate in that [regard], because our fans do [still buy our releases]. And it's almost like a collector's item — they do still buy the albums, whether it's CD format, whether it's getting it from the various sites legally through digital downloading, or whether they wanna wait for when we do our box set, like our releases in the big jewel-cased LPs, or just the LP release. We're very fortunate in that sense, because that's the kind of relationship we've always had with our fan base, and so they continue to want to buy into it. But, by any stretch of the imagination, it's not what it used to be. We still are affected by the current events, as to people being able to download music for free, which I am totally not in agreement with. I'm absolutely not. Because, at the end of the day, it's licensed material and it's stuff that we put a lot of time into. And it's no different than somebody walking into a grocery store and feeling like they don't have to buy the groceries that they need. But what about all the people that went into making that available to the point where you can access it. We all work for what we feel is naturally to be paid for."

"We finish up this tour August 3, and we go home. Three days later, I'm in the studio recording vocals for the new album. And then the other guys will be finishing off all the other little pieces and layering the tracks and stuff like that. But, yeah, so that will be what I'm doing. And then, come September, I do the Arjen Lucassen thing, 'The Theater Equation', in Rotterdam [The Netherlands]. There's four shows being played, and it's to bring to stage 'The Human Equation' album that I did with him [as AYREON] in 2004. Pretty much all the shows are sold out; there's, like, a hundred tickets left for the one matinee on a Sunday. And it's amazing, all the production and the process is quite detailed and entailing a lot of rehearsal, so it's gonna be an amazing production. So I'm doing that in September — the 18th, 19th and 20th in Rotterdam. And then… The other guys, I'm not sure exactly. I think Jordan [Rudess, keyboards] is doing some orchestral thing. But, basically, then we're gonna be promoting the album that will be coming out, and then we'll be supporting that. So there will be, probably, from October to January, we'll be starting to focus on the new album and then, at the same time, it'll be a little quiet and [we'll be] kind of chilling out and getting geared up and ready to hit the stage again for another year or so after that."