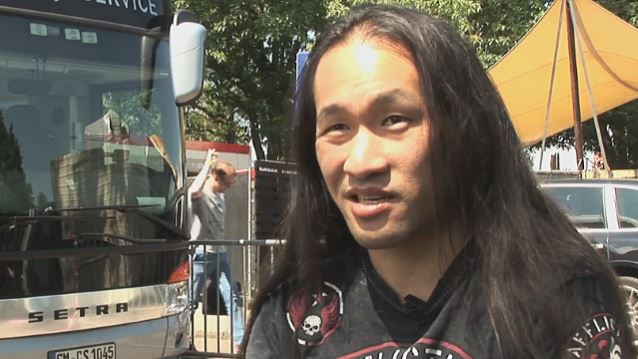 Niclas Müller-Hansen of RockSverige.se recently conducted an interview with guitarist Herman Li of British epic power metallers DRAGONFORCE. A couple of excerpts from the chat follow below.

RockSverige.se: How do you look at [DRAGONFORCE's] debut album, "Valley Of The Damned" (2003), today?

Herman: Maybe 10 years ago, I would've said, "I wish we'd done this and that," but these days, not really. I've learned and experienced a lot in life, and you understand that if you get the perfect album the first time, there's no way to go. It's all about learning and experiencing and you always build on what you did before and learn from it and make better albums. I think it was the best we could come up with back then. It's got that energy that we wouldn't be able to create if we re-recorded those songs. It wouldn't be the same.

RockSverige.se: What are you proudest of so far in your career?

Herman: I think that what everyone in the band should be proud of, is that we're still going. It's not easy keeping a band going and it's not easy to keep making good albums and sticking to your guns. There are so many things happening around the world that could change your path or break a band. We're still making albums and I believe that every album DRAGONFORCE has done has been really catchy-sounding albums, at least in my opinion. I'm happy we're still doing it.

RockSverige.se: What would you say is the secret of success?

Herman: I think it always comes down to hard work. Work in all areas and nonstop. People always ask me what I do outside of the band and I really don't do anything outside of the band. I've been practicing guitar and trying to re-string one of my old seven-strings and practicing on that. It's harder to play, so it's gonna make me play better.

RockSverige.se: If you had the chance to go back and meet your younger self, what kind of advice would you give to yourself?

Herman: I really wouldn't change anything. You have the butterfly effect of time travelling and you never know what happens after. I'm quite happy with the way I am now. You go through life and make mistakes and do good things and bad things and you're trying to do the right thing. Without the mistakes, you're never gonna learn. I'll leave it the way it is.