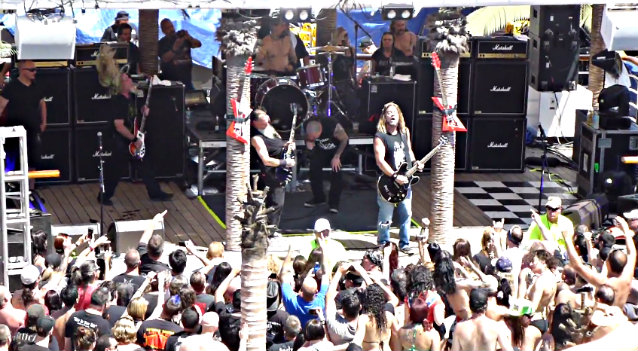 Fan-filmed video footage of DOWN's September 23 performance on MOTÖRHEAD's Motörboat cruise can be seen below.

The first annual MOTÖRHEAD's Motörboat sailed from Miami, visiting the ports of Key West , Florida and Cozumel just off Mexico's Yucatan Peninsula for the September 22-26 cruise on the Carnival Ecstasy. "The Loudest Boat In The World" featured MOTÖRHEAD, ANTHRAX, METAL ALLEGIANCE, TESTAMENT, DOWN, HIGH ON FIRE, KILL DEVIL HILL, Zakk Wylde, JIM BREUER BAND, DANKO JONES, FIREBALL MINISTRY, WILSON and CILVER, as well as a spoken-word performance by legendary heavy metal musician, author, and television personality Scott Ian. While onboard, guests had a once-in-a-lifetime opportunity to interact with band members and will see unforgettable performances on various stages throughout the ship.

DOWN's latest EP, "Down IV - Part Two", sold around 10,000 copies in the United States in its first week of release to debut at position No. 23 on The Billboard 200 chart.

"Down IV - Part Two" was released on May 13 via Down Records/ADA Music. Tracked at Nodferatu's Lair — iconic vocalist Philip H. Anselmo's home studio — and produced by Michael Thompson, Anselmo and DOWN, the new EP is the eagerly anticipated sequel to "Down IV - Part One". The new offering from DOWN is packed with the quintet's signature gargantuan riffs, swamp blues leads, crashing drums and hypnotic howls, upholding a certain tradition that countless fans celebrate, expanding their own musical mythos as they leave its pillars intact and untouched.