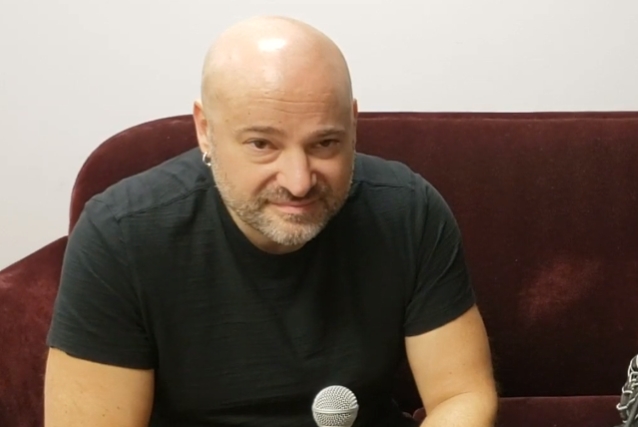 Prior to DISTURBED's performance in Washington, D.C. on February 21, vocalist David Draiman spoke with Bodhi of iHeartRadio. The full conversation can be viewed below. A few excerpts follow (as transcribed by BLABBERMOUTH.NET).

David: "The whole idea is [to] give people a little bit of a release and escape from the barrage of garbage they're assaulted with on a daily basis. Just a means of really bringing people from all walks of life and all frames of mind and all beliefs and all colors and creeds together for at least a couple hours, to forget everything that everybody wants to remind us we have to fight about over and over again, and just to remember that when you get a whole bunch of people in a room together, and they're all there for the same purpose, and they hear the song that everybody knows, and they're singing it together, and you look around at each other and you realize that all the rest of the reasons, fabricated or otherwise, that people would try to make you believe that we're so very divided don't matter anymore."

On the difficulty of choosing a setlist:

David: "It's a good problem to have, but it can be a problem. We're playing for two hours, and there's still songs that we won't get to on a nightly basis. But we do try to change it up. We've added a couple new songs this particular leg, depending on how I feel on a given night — whether or not I can pull them off every night. [Laughs] But the level of production that we have gone for on this run requires quite a lot of building and preparation for each individual song, so choosing them was actually a bit of a scientific process. It was actually our colleagues over at [management firm] Q Prime that really brought in utilizing some of the analytics that you can get online, so looking at streaming numbers and see which are the tracks that are most heavily streamed. Thankfully, we're at a point where we've got this cavalcade of hits, and it's very difficult to decide which ones even from the 'hit' categories you leave out, because we can't even play all of them. [It's a] very good problem to have — we're incredibly blessed — and we've kept a couple spots in the set to be what we refer to in the industry as 'audibles,' so we'll swap them out from time to time. People are getting a two-hour journey through our catalog, and it's as rewarding for us as it is for them."

On how he takes care of his voice while touring:

David: "It's incredibly difficult. Particularly this season, all of our colleagues are getting the flu or getting upper respiratory infections. People are postponing and canceling tours left and right — of course, that is, with all due respect, those of us who actually still sing live. [Laughs] We wear it on our sleeves. It's difficult when you have to balance everything all the time, but it's so worth it. The beginning of the last run, I started off just coming off of pneumonia. This run, I already have developed another sinus infection. I'm fighting it now. It's been difficult. Sometimes, between runs when I finally have a good couple of months, I'm probably going to have to get another septoplasty done. [Ed. note: According to Wikipedia, a septoplasty is a "corrective surgical procedure done to straighten a deviated nasal septum," the partition between the two nasal cavities.] I had one previous for a very badly deviated septum. My nose was broken, like, three different times, so there are all kinds of pieces of shrapnel in there and whatnot. I need to get it fixed properly, because I have chronic sinus infections that happen again and again, and it's really starting to be a pain in the ass. I'm kind of tired of it. Whether it's the godfather of metal himself, Ozzy [Osbourne], who's currently recovering; Oli from BRING ME THE HORIZON; I heard that the singer from GRETA VAN FLEET just had an issue... we've had a rough time, all of us, this winter, and it's not easy. You try to stay hydrated. You try to get the proper amount of rest. More important than anything else, you try to perform with the right technique and the right balance and the right support breath-wise, and that really does make a tremendous amount of difference, but we all get excited and we all get lost in the moment sometimes, and sometimes, that technique may slip a little bit as you're excited. It's this constant tightrope you're walking, but I suppose if it were easy, everybody would be doing it."

On how long it takes the band in between tours to "get the itch" to get back on the road:

David: "I hate to admit it, but we get the itch literally within a few months of being away. Then we beat ourselves down, like, 'No, no, no — not yet. We've got a little bit more concentrated time with the family.' It's hard. Don't get me wrong — our families are our world, and everything really revolves around them, but there is no addiction in existence like being addicted to the sensation of playing live. There really isn't, and you do start to go into withdrawal after a while. It's this huge influx of energy that is absolutely intoxicating and gratifying beyond measure. When you know you're giving people that empowerment, that strength, and you have so many incredible poignant moments that you can experience on a nightly basis, it's really hard to divorce yourself from it for too long. Between this [tour] and the next one, it might be a little longer because we're all getting older — I didn't have all this gray in the beard before [laughs] — so we've got to just measure ourselves a little bit better, and try to find the balance between family, health and performing."

DISTURBED's latest album, "Evolution", was released in October via Reprise.