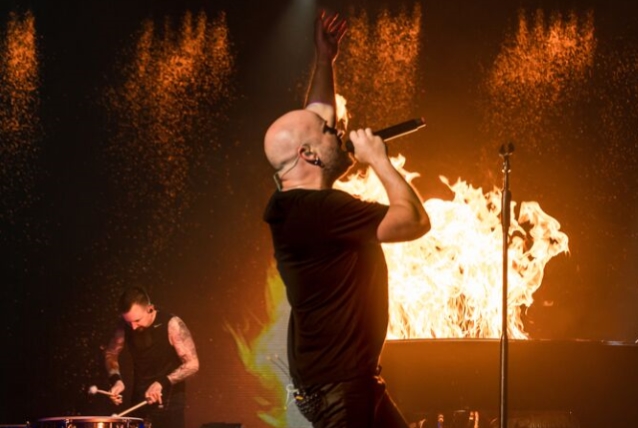 DISTURBED has released a performance video for the song "Never Again", filmed on July 2 in Tel Aviv, Israel. The track, from 2010's "Asylum" album, was written about the Holocaust and calls out people who deny it.

Says the band: "Our worldwide 'Evolution' tour has been an absolute pleasure, especially sharing it with all of you Disturbed Ones.

"We anchored our European run with a sold-out show in Israel, which is one of many highlights since we kicked off this tour in January. Watch the full video for 'Never Again' live in Tel Aviv."

DISTURBED singer David Draiman, who is Jewish, addressed the crowd in Hebrew at many points during the show at Live Park Rishon LeZion and sang the Israeli national anthem "Hatikvah".

Although David had visited the country many times, this was the first DISTURBED concert in the Jewish state.

In recent months, Draiman has been speaking out against the Boycott, Divestment and Sanctions (BDS) campaign, which calls for economic pressure on Israel to end the occupation of Palestinian land, grant Arab citizens equal rights and recognize the right of return to Palestinian refugees.

Earlier in the month, Draiman spoke to KAN radio, where he called BDS advocates "idiots" and "Nazis in suits."