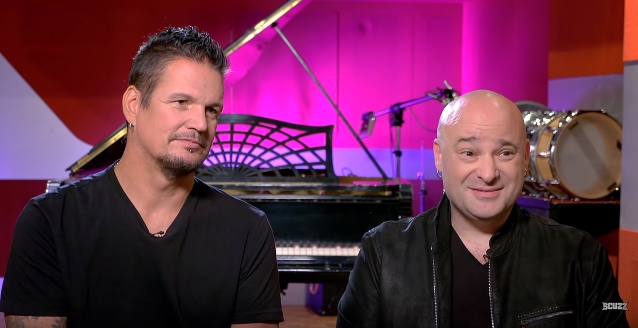 Sophie K of Scuzz TV recently conducted an interview with DISTURBED singer David Draiman and guitarist Dan Donegan. You can now watch the chat below. A couple of excerpts follow (transcribed by BLABBERMOUTH.NET).

On the lyrical themes covered on DISTURBED's latest album, "Evolution":

David: "I have the benefit of being able to draw from Danny and from Mike [Wengren, drums] for lyrical inspiration. 'Cause after you go ahead and… we've written, what? Well over a hundred songs; [I don't know] the exact number. But when you dwell in darkness, it's kind of hard to continue to navigate it. I don't wanna keep running over the same type of subject matter. So when I kind of reach a brick wall as far as a theme that I wanna write about, I'll go to Danny and I'll go to Mike and I'm, like, 'Feed me something. Feed me a topic. Feed me anything to get me started writing about something.' Otherwise I go to all my regular spots, and they're — to be perfectly honest — sometimes places that, from a thematic standpoint, I've visited. And it's not like we haven't visited some of the subject matter on this record in previous records as well, but these are done in definitely a very different light. Taking current events and things that have transpired over the course of the past number of years into definite consideration."

On tapping back into the original DISTURBED sound on some of the songs on "Evolution":

David: "Fans are always requesting, 'We want another record like [2000's] 'The Sickness'.' It's, like, it's impossible — not only from a creative standpoint. There'd be no merit to replicating something, to repeating something. As artists and as musicians, you wanna continue to go in different directions and develop. Ironically enough, the first single off this record, 'Are You Ready', is probably the most 'Sickness'-era-feeling track that we've put out in quite a while."

Dan: "The song, musically, the riff and the electronics and everything, that was written back in 2004, and it was just something that we kind of put in the vault. 'Cause we already had the previous albums' material written, so we never finished the idea of it. But we went back to revisit some riffs. I mean, when people say they want the old sound or things like that, we can't force that out — we're not gonna just regurgitate old things — but we have some stuff in the archives that was worth revisiting and just taking another look at it, 'cause we never finished that thought. So when I brought the music back into the fold of things, I never expected David to gravitate to it right away, and it was one of the first things he came to, of the plugged-in material. I'll take an idea that I really liked and try to find another time to force it back in."

David: "He's sneaky like that. He waits just enough time to where my memory doesn't have the most distinct recollection of it. It's somewhat vaguely familiar. But this one I didn't remember right off the bat, and then the more I started working on it, [I thought] 'Okay, I remember working with this before and not being able to really come up with anything for it.' But he's absolutely right — sometimes he'll bring it back when I'm in a different headspace, years down the line, and it happens."

Dan: "14 years later, let me try to sneak it back in here. But, yeah, it was enough to trigger it. It's good to know that, sonically, it still stood the test of time to us and it does have a bit of that early DISTURBED sound to it. But I probably couldn't write something like that today if it was started from scratch, 'cause then it would be forcing it. Everything's gotta come naturally. That was just something in the archives that was worth revisiting and trying to get my way of sneaking it back in, and luckily, he killed it."

On whether there are ever moments on tour when the members of DISTURBED get tired and have to pull each other up:

David: "Oh, yeah. The road is hard, and it beats you up. Sometimes when one cylinder is just slightly misfiring, the other cylinders can compensate. It's not always the case, but we do the best we can."

Dan: "When you take a moment to remind yourself that, especially if we're over here [in Europe], it may be every few years that we come by, and we've gotta really make it count. We realize that the fans have either taken time off work or they've saved their money up for the ticket if they chose to come see us and we're the ones they chose to come see, then step up your game — just give 'em what they've come to see. So it's inspirational. Like [David] said, it's exhausting at times, the older we are. We're hanging in there, and we're doing our thing, but when the lights go down and you hear the roar of the crowd, the adrenaline rush comes back. We're on a mission to continue to make our mark. We've been fortunate and blessed that our whole career has been headed in that same upward direction, and we still have that fire to continue. We still feel like we have a lot to do and a lot to say."

"Evolution" was released on October 19. Like 2015's "Immortalized", the new disc was recorded at The Hideout Recording Studio in Las Vegas, Nevada with producer Kevin Churko.

DISTURBED's "Evolution" tour is scheduled to kick off January 9 in San Diego, California. The North American trek will make stops in cities like Denver, Houston, Nashville, New York, Pittsburgh, and Toronto before wrapping up in Rosemont, Illinois on March 8. Support on the 27-city jaunt will come from Canada's THREE DAYS GRACE.

Following the U.S. leg of the tour, DISTURBED will travel overseas to play in Spain, Czech Republic, Italy, and more countries throughout Europe. Their last slated show, as of right now, is on May 14 in Manchester, England.