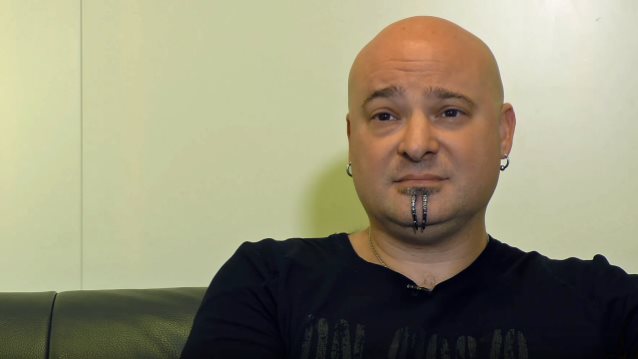 On February 18, Holland's FaceCulture conducted an interview with DISTURBED singer David Draiman. You can watch the chat in two parts below.

Speaking about DISTURBED's songwriting approach on the band's latest album, 2015's "Immortalized", Draiman said: "The only template of any kind we had was simply to have no template. It was for us to remove any and all limitations creatively and go wherever our creative barometers took us, so to speak."

He added: "We've never gone into the studio saying that, 'Okay, we want this to be the darkest record possible' or 'the angriest record possible,' or, 'This has to deal with this theme' or 'that theme' or whatever — it's always left pretty open. But at this particular point in our career, from a creative perspective, having accomplished what we've accomplished — thankfully — having been blessed with so many incredible blessings as artists, we just felt it was time for us to spread our wings a little bit."

As previously reported, DISTURBED plans to return to the studio later this year and record an acoustic EP before starting work on its next full-length studio album.

The idea of DISTURBED doing an acoustic EP is not a foreign concept for the band. Draiman spoke a while back, saying DISTURBED has always wanted to put melody in its music. "There's a huge contingency of kids that want stuff that they can just bash their head open to, you know, and that's great," he said. "We provide that as well. But to us, when we make our music, it has to be fused with melody. The aggression and the power needs to be harnessed with hooks that stay with you."

Draiman said that the band will probably record its seventh full-length album in 2018 for release later that year, with touring to take place in 2019.

An acoustic EP now could also capitalize on the success DISTURBED has had with its cover of SIMON & GARFUNKEL's "The Sound Of Silence", which has been a massive hit that has introduced the band to new audiences.

Asked if any "The Sound Of Silence" fans had been confused by the group's normally heavy sound, Draiman replied, "I haven't seen any of that… Granted, 'The Sound Of Silence' is an amazing and beautiful moment within the performance every single night, but it's definitely not the situation that I was warned of, potentially."

"Immortalized" ended a four-year hiatus for the quartet and was its fifth album to enter The Billboard 200 chart at No. 1.