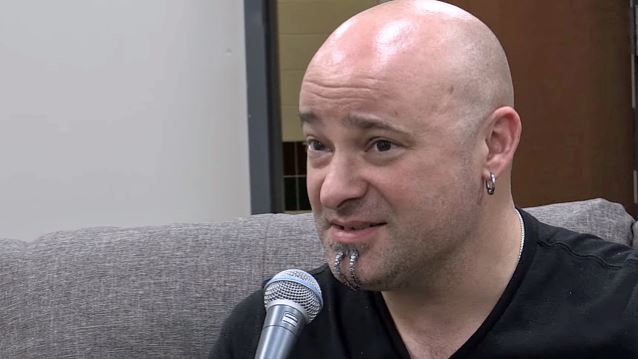 Jon Smith of the X96 radio station conducted an interview with DISTURBED frontman David Draiman before the band's September 27 concert at Maverik Center in Salt Lake City, Utah. You can now watch the chat below.

Asked if DISTURBED had to get permission from Paul Simon and Art Garfunkel to record a cover version of SIMON & GARFUNKEL's "The Sound Of Silence" for DISTURBED's "Immortalized" album, Draiman said: "No. When you do a cover, you don't actually have to get permission from anybody. You just need to give them the publishing that it generates, legally. Now, you always hope that whoever the writer is, that they'll give you their blessing, or at least like what you've done, but unless you're going to utilize it for television purposes, or things of that nature, it's a different licensing, and for those purposes, you'd have to get permission. But just to actually cover the song, that you don't need permission.'

He continued: "Permission or not, Paul reached out to me and we've been in contact with each other a number of times already. He contacted me right after [DISTURBED's] 'Conan' performance [of 'The Sound Of Silence'] and was very, very complimentary, and has been a big supporter. And [he] posted the 'Conan' performance, actually, on his own social media and has really been very, very positive and, like I said, very flatteringly complimentary about it. So it's been very surreal."

Draiman added that DISTURBED has been surprised by the huge commercial success of its cover of "The Sound Of Silence". He said: "It keeps on spreading to parts of the world that either we've never been to or that are just discovering it. The track is, as of yesterday, No. 2 on the iTunes Top 100 in Germany, it's No. 3 in Luxembourg, it's No. 1 in Slovenia. I mean, some places that we've literally… I've never been to Slovenia before. So it's pretty amazing to see how many people have been embracing it and how widely it's been embraced."

The video for DISTURBED's version of "Silence", which was released in December 2015, has been seen more than 112 million times, a record number of views on YouTube for the group.

The band began a new round of North American tour dates on September 23 in Las Vegas, ending in Sacramento, California one month later.