Angeleno extreme metal band DIA DE LOS MUERTOS will release a new EP, "No Money No Fiesta", on January 21, 2014 for free digitally via the band's web site DDLM.net. Recorded at NRG Studios in North Hollywood, California and mixed by Roy Z (SEPULTURA, JUDAS PRIEST, BRUCE DICKINSON), it is the follow-up to the band's successful "Satanico-Dramatico", and will include a version in the Portuguese language of Brazil black metal pioneers SARCOFAGO's song "Crush-Kill-Destroy".

The cover artwork for "No Money No Fiesta" was created by Spanish illustrator Marcos Cabrera.

A track from "No Money No Fiesta" entitled "Malinchista" can be streamed using the SoundCloud widget below.

Comments DIA DE LOS MUERTOS lead singer Rosa Arias: "'Malinchista' is an exploration of the dark cloud that has covered Mexican and Latin-American people since the Spanish conquest up until the filthy corporations in present times. They keep extorting our people and securing a blindfold over our eyes, keeping us from being aware of everything that we have lost in culture and traditions. The very own roots of this land."

To finalize its extensive international touring in 2013, which included major festivals in countries like Argentina, Chile, Mexico, Colombia and Spain, DIA DE LOS MUERTOS celebrated the ancient pre-hispanic tradition that influenced the band's name, DIA DE LOS MUERTOS (Day Of The Dead), with two headlining shows to took place in Mexico City's Multiforo Alicia on November 1, and in the city of Morelia on November 2. New songs from "No Money No Fiesta" were performed live for the first time at these shows. 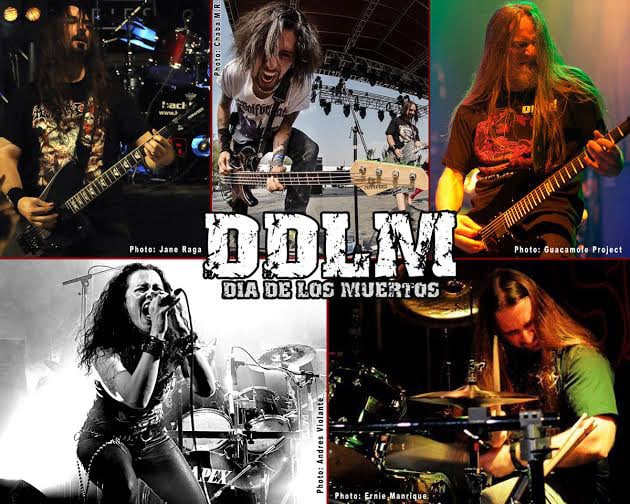