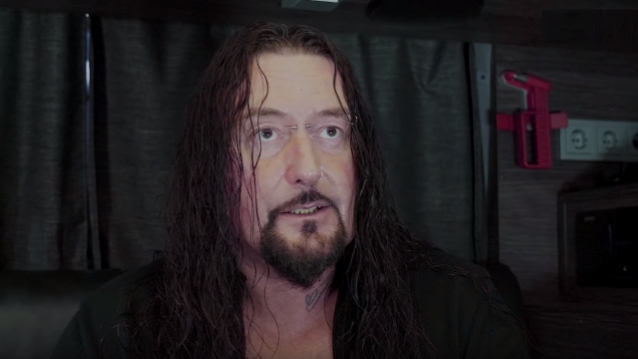 France's Duke TV recently conducted an interview with bassist/vocalist Schmier of German thrash metal veterans DESTRUCTION. You can now watch the chat below. A couple of excerpts follow (transcribed by BLABBERMOUTH.NET).

Schmier: "We were looking for the new lineup for a long time. When we knew our old drummer would leave the band, we already had Randy Black in mind, because he helped us out before and he was one of my favorite drummers for many years. And, of course, every new member brings a little bit of a new style, a new direction he plays, but all in all, for DESTRUCTION, it's important that they fit into the DESTRUCTION style. Now we have found a very fresh new lineup [with which] we can [make] hopefully another 10, 15, 20 years of music. And for us, it was important to make a little change in the routine. We wanted to have a second guitarist for live, but also for the new album."

On the making of DESTRUCTION's upcoming album:

Schmier: "It's a process that took us three months — writing, recording and mixing. The new influence of the guys is there, because there's more shredding leads. Randy is a very solid, very tight player — very groovy also. You can hear that. We tried to make songs this time that are hitting on the target faster — the songs hit you right away. It's brutal, but it's very catchy. So you hear the songs the first time, right away you will remember [them]. You don't write an album like this every time. Sometimes you write songs, and after a while, you're, like, 'It's maybe too complicated,' because you wanna be an artist, you wanna express yourself. I think this time we managed to write an album that's very punchy."

Damir is a Swiss guitar player of Bosnian decent who works as a guitar teacher, himself being a former pupil of Tommy Vetterli (CORONER). He also plays in a heavy metal band called GOMORRA and previously contributed three solos to DESTRUCTION's 2016 album "Under Attack".

DESTRUCTION previously played with two guitarists in the late 1980s (with the addition of Harry Wilkens) and then again throughout much of the 1990s (Michael "Ano" Piranio).