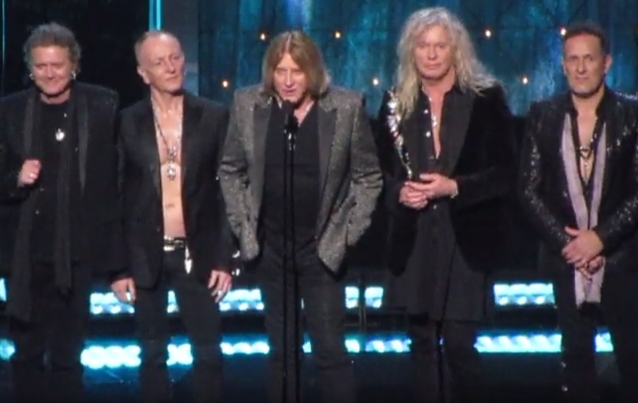 "[Singer] Joe [Elliott] and I, in particular, have shared many precious and fun moments," May recalled. "We have a strong bond and he’s one of my dearest pals. When news got out of [Freddie Mercury's] passing, the first call I got was from Joe Elliott."

Elliott delivered an acceptance speech on DEF LEPPARD's behalf, telling the audience: "Those songs we've written over the years were always our main priority. And although there seemed to be a looming sense of tragedy around every corner, we just wouldn't let it in. But it's true, it did seem that every time we made some musical headway, life would knock us back down somewhat. 'Pyromania' is a raging success… then Rick has a life-changing accident. He survived it and came out the other side stronger. 'Hysteria' gave us the global success that we'd always craved… and then we lost Steve. But we survived and came out the other side stronger people. And that's the way it's always played out throughout our career. So let's face facts here, if alcoholism, car crashes and cancer couldn’t kill us, the nineties had no fucking chance."

Elliott thanked his parents, saying his father loaned the band £150 to make their first very recording back in 1978 while his mother taught him the first guitar chords he ever knew. "I've learned two more since," Elliott then quipped, "and I've come to realize you don't actually really need them at all."

Elliott also thanked Willis, who "couldn't be" with his former bandmates at the induction ceremony. Joe said: "I want to emphasize how very important Pete's role was in this band in the early days. He was a terrific player, had a very mischievous sense of humor, but he brought plenty of great musical ideas to the band." Elliott also paid tribute to Clark, saying the guitarist "made a massive musical contribution to this band. His incredible and unique riffs helped shape some of the most important songs we will ever write, and it really does go without saying that we love him and we miss him every day."

One of the top-selling rock acts of of all time, DEF LEPPARD had been eligible for the Rock Hall since 2004.