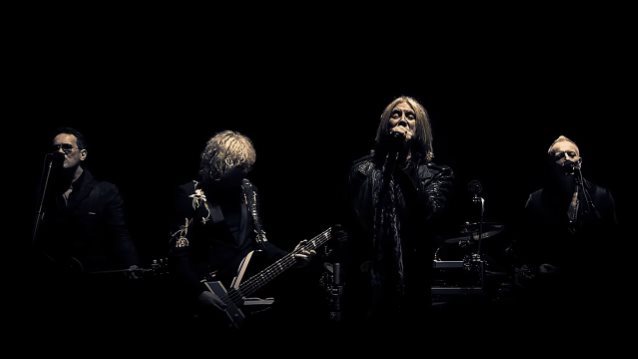 DEF LEPPARD's Frank Gryner-directed video for the song "Man Enough" can be seen below. The single just cracked the Top 10 on the Classic Rock chart and is the third track off the band's latest, self-titled studio album.

DEF LEPPARD guitarist Phil Collen told TeamRock about "Man Enough": "I had this bass riff floating around my head, and I wanted it to have a similar vibe to 'Billy Jean' by Michael Jackson — almost a disco vibe. I didn't know what it was going to be called, then I played it to Joe [Elliott, vocals]; we went to [drummer] Rick Allen's 50th birthday, and he said, 'Shit! I've got a great idea for this song! And it's called 'Are You Man Enough To Be My Girl'. People have said it reminds them of 'Another One Bites The Dust' by QUEEN. It has this dancey appeal. Our song 'All Night' was a bit like that, and 'Excitable' on 'Hysteria'. But I think this is the first time we've really made it work. It just fell into place, and I think that's because we didn’t restrict ourselves. Every song on the album's like that. It was, like, 'Fuck everybody. This album was done for us.' It wasn't a business venture. We really didn't care what anybody thought. We went to town on it; it was a lot of fun."

"Def Leppard" was recorded in early 2015 at Elliott's studio in Dublin, Ireland. The disc marked the group's first new collection of material in seven years and eleventh official studio release. The album debuted in the Top 5 on Billboard's Top 200 chart in the U.S. and went Top 10 in 25 countries, including a #1 in Japan. The band's previous two singles off of their new album, "Let's Go" and "Dangerous", also went to #1 on the Classic Radio chart.

DEF LEPPARD's highly anticipated U.S. summer tour kicks off in Boston, Massachusetts at the Xfinity Center on June 22 and wraps up in Cedar Rapids, Iowa at the U.S. Cellular Center on October 10. The Live Nation-promoted outing will storm through cities across all parts of the U.S. and Canada.