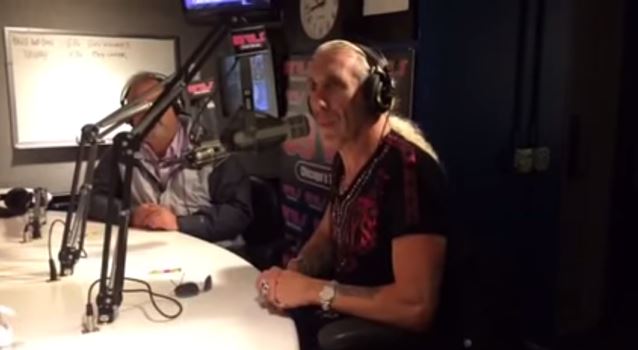 TWISTED SISTED frontman Dee Snider was recently interviewed on the 89 WLS radio station in Chicago, Illinois. You can now watch a clip from the chat below. A couple of excerpts follow (transcribed by BLABBERMOUTH.NET).

On TWISTED SISTER's rise to fame in the mid-1980s:

Dee: "It was a shock. I mean, I never expected to be a band that became a household word and had hit records. I thought we'd be one of those bands that went from town to town and sold records at every show. [A band] like [Southern rock veterans] BLACK OAK ARKANSAS, a band nobody ever heard of on the radio, but still was popular. But we just suddenly… MTV came out and they were looking for visual bands and we fit the bill."

On how his life philosophy has changed in the last 30 years:

Dee: "It hasn't changed one iota. Yeah, man! But my philosophy on life has always been pretty against the norm. I mean, I never did drugs, I never drank, I was always into fitness, I've been with the same woman 38 years. I was an alien in the rock and roll community; they were looking at me, going, 'What is this guy's deal?' And I'm looking at them, going, 'You don't get it. This is a long game, man. You're looking to exit at 30, I'm looking to exit in my 90s. I wanna be like [American television writer and producer] Norman Lear [who is 92].'"

On his new musical, "Dee Snider's Rock & Roll Christmas Tale", which is playing the Broadway Playhouse at Water Tower Place in Chicago through January 4:

Dee: "I'm a dad of four with three grandkids, and a big Christmas guy, and I wanted a show I could bring the family to. So that was rule No. 1: it had to be something [where we could have] a shared experience. But I wanted it to be cool. I said, 'I think it’s time for a show that rocks.' So the 'Rock & Roll Christmas Tale' was born — the story of a struggling heavy metal band who sell their souls to the devil, but find the magic of Christmas instead. A story as old as time itself. I wanna show that you can be warm and fuzzy and hard and heavy at the same time. You can be a dad, you can be a granddad and still be cool."