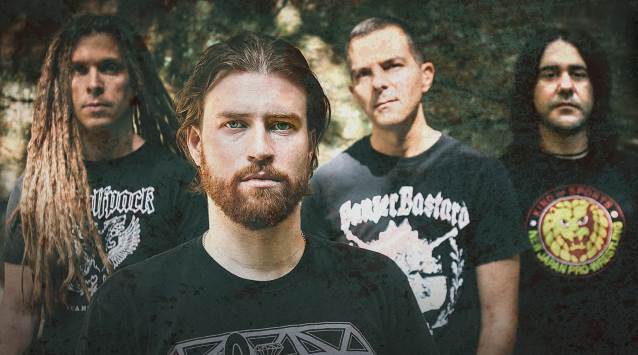 Nearly five years after the release of "We Ain't Leavin' Till You're Bleedin'", Massachusetts old-school hardcore band DEATH RAY VISION — which features in its ranks KILLSWITCH ENGAGE bassist Mike D'Antonio — has finalized the songwriting process for its sophomore effort, "Negative Mental Attitude". Recording will begin in September at Mad Oak Studio, where the band previously recorded its first five-song EP, "Get Lost Or Get Dead", once again with producer Benny Grotto at the helm. A late 2018 release via Bullet Tooth is expected.

"It's a playful jab at the hardcore scene, in a way," D'Antonio states about the album title. "There's a lot of people who preach a 'positive mental attitude' and they practice anything but that." The title also succinctly represents the band's current direction which deviates from their previous "go old-school or go home" approach. "We don't really have a lot of good moods on this one," guitarist Pete Cortese adds. "It's a little more morose, melodic, and to say that it will be 'our finest work to date' would be a little too positive for the angle we're going for".

DEATH RAY VISION underwent lineup changes since its last release, with vocalist Brian Fair (SHADOWS FALL) and guitarist Zack Wells making their exit due to family and relocation across the country. "It makes more sense for the guys to have someone local and available at all times," states Fair. "Now that I live in St. Louis doing the 'Married With Children' thing, it became increasingly tougher to make things work out logistically." With the departure of Fair comes new vocalist Jeff Gard, formerly of Boston-based CHUGGERNAUT. Gard offers a tremendous vocal range which provoked a shift in style. The transition happened quickly, as D'Antonio explains. "I was forwarded a song that Jeff sang on, and I immediately wanted him to audition," he says. "After two practices, it was an easy choice to make."

Amidst broadening their musical horizons, DEATH RAY VISION commits to keeping an old-school baseline at its core. Drummer Colin Conway adds: "There will always be speed and aggression in our formula, but instead of presenting a 'tough guy' demeanor, we break through that shell and expose the 'tragic hero' within."