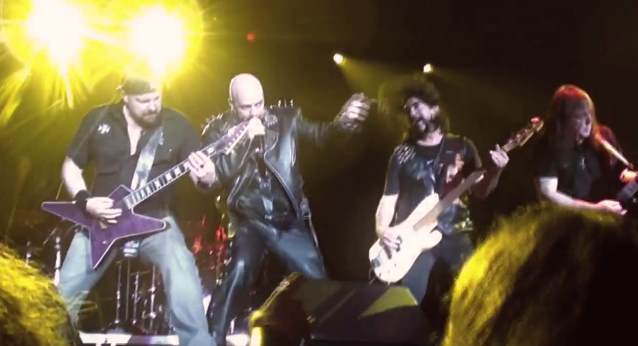 "Hammer Down", the new video from DEATH DEALER, the band featuring MANOWAR and the DICTATORS guitarist Ross "The Boss" Friedman alongside vocalist Sean Peck (CAGE), guitarist Stu Marshall (producer and guitarist for such voices as Udo Dirkschneider and Steve Grimmett), bassist Mike Davis (HALFORD, LIZZY BORDEN), and drummer Steve Bolognese (INTO ETERNITY), can be seen below. The clip features footage shot during DEATH DEALER's March/April European tour as the support act for the "Metal All Stars". The group visited many European countries, including Romania, Turkey, Belarus, Sweden, Latvia, Finland and Russia.

"Hammer Down" is taken from DEATH DEALER's debut album, "War Master", which was released in August 2013 through Steel Cartel Records.

"The DEATH DEALER sound is a mighty combination of five very talented, seasoned musicians," explained Ross. "It's classic power metal with the brutal edge of thrash, speed, and precision."

A former drummer for INTO ETERNITY and a Berklee College Of Music instructor, Bolognese is often spoken of as "the drummer's drummer," having received mentoring from drum prodigy Mike Mangini (DREAM THEATER).

DEATH DEALER is working on material for its second album for a late 2014 release.