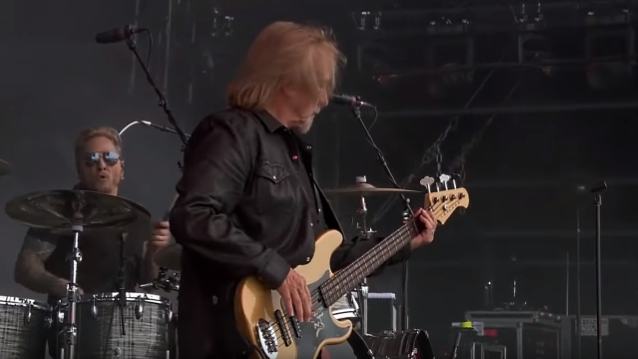 Professionally filmed video footage of DEADLAND RITUAL's June 22 performance at Hellfest in Clisson, France can be seen below.

Speaking about the "supergroup" tag that has been attached to DEADLAND RITUAL, Butler said: "We don't class ourselves as a supergroup, 'cause… I don't know. It's a bit of a vacant term for me. We're just four blokes getting together, having fun at the moment and writing some good stuff. But so far, because Steve has been still on tour with Billy Idol, we've been having to write stuff in between these tours with Billy Idol at the moment. So we'll have more time to get everything together when his tour is finished."

DEADLAND RITUAL recently released its first two songs, "Down In Flames" and "Broken And Bruised". Both tracks, which were produced by Greg Fidelman (METALLICA, SLIPKNOT), were made available via Sonik Riot Records/AWAL powered by Kobalt.

"We're basically an independent band right now — no record deal yet, but there's some labels talking to us," Sorum said. "It's great we're out playing these new songs, 'cause once we go in and record them, they'll be live-tested, if you will, and then hopefully will go down on record as a really cool version of what we've been doing live."

Butler went on to say that there is no long-term plan for DEADLAND RITUAL at the moment. "We're just going to see how it goes," he said. "We've written seven songs up to now, so we have to get those recorded. We've got quite a few record companies interested. But at first, it was 'have a jam, and let's do some festivals.' But it seems to have gone beyond that, people are taking it more seriously now. So if things work out with the gigs that we do we'll carry on. I'm excited about it. I really like the music we're doing, not restricted to any kind of formula. And as I say, each track stands on its own, different in its own way. I'm really looking forward looking to it."

DEADLAND RITUAL made its live debut on May 28 at the Troubadour in West Hollywood, California.