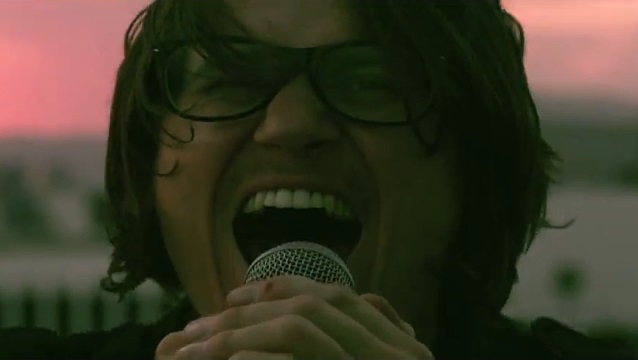 "The Misery We Make", the new video from Washington D.C. metallers DARKEST HOUR, can be seen below. The song is taken from the band's self-titled album, which is being released on August 5 via Sumerian Records. The CD was recorded at Oceanic Recording with producer Taylor Larson.

According to a press release, "Darkest Hour" is the band "most accomplished and innovative offering" to date. The album "showcases each individual pushing themselves outside of their comfort zone implementing more clean vocals with expanded dynamic melodies rooted firmly in thrash metal with bombastic shredding guitar solos. This offering is soon to be yet another benchmark in heavy metal history."

Comments DARKEST HOUR guitarist Mike Schleibaum: "Along with a new rhythm section, we also chose a very different route for the album's production this time around. While we have worked with well known producers in the past (Brian McTernan, Devin Townsend, Fredrik Nordström), we chose a much younger and more local producer in Taylor Larson. He recently gained a lot of attention after his work with PERIPHERY, and after spending some time working with him, we knew he was the man for the job."

He continues: "Tasked with making the most sonically modern, melodic and diverse DARKEST HOUR album yet, Taylor looked the challenge right in the eyes. His uncompromising approach to pushing us as songwriters and musicians was unrivaled. It took a young heart with a fresh perspective to get this album moving in the right direction and Taylor was the man in the driver's seat."

DARKEST HOUR's sixth CD, "The Human Romance", sold around 3,600 copies in the United States in its first week of release to debut at position No. 185 on The Billboard 200 chart. The effort landed at position No. 3 on the Top New Artist Albums (Heatseekers) chart, which lists the best-selling albums by new and developing artists, defined as those who have never appeared in the Top 100 of The Billboard 200.