DARK ANGEL members Don Doty (vocals) and Eric Meyer (guitar) will guest on "The Metal Magdalene With Jet" on Metal Messiah Radio on Tuesday, September 3 at 9:00 p.m. EST. They will tell the audience about what's going on with the band now and maybe laying some of the rumors to rest. They will also talk about the early days of DARK ANGEL, share some fan stories, and discuss the positive reaction to the news of the band's return.

Less than a month after it was announced that classic late '80s /early '90s California thrashers DARK ANGEL would reunite for a number of shows next year — including an appearance at the Keep It True XVII festival, set to take place April 25-26, 2014 at Tauberfrankenhalle in Lauda-Königshofen, Germany — the bandmembers have come forward to express thoughts about future touring rumors spreading wildly across the web.

Gene Hoglan (drums): "I'm here to state that again, DFA [DARK Fucking ANGEL] is still talking about doing shows in 2014. As of now, none of the members have booked anything in regards to fests or individual dates. Of course, there are the rumors of certain fests being booked, but any talks that may have occurred were done so without the ENTIRE band's knowledge and acquiescence, and therefore cannot be deemed as credible. One thing that holds true to us is that we feel that DARK ANGEL's legacy is in danger of being tarnished if these random acts were to continue.

"There are a host of valid reasons why DARK ANGEL has been slow to react to the myriad offers we have received in the past to reunite, but the most important reason is that we wish to do the greatest service possible to our fans, and if that means the time has yet to be right, then the time has not been right. And concerning the immediate future of 2014, if the time and conditions are not right, then again, they will not be right for all involved. Most importantly, our fans.

"We do realize that yes, reunions are quite the norm these days. DARK ANGEL, however, has never conformed to the norm, and we refuse to reunite unless we can come back and give our fans the most stellar situation possible. Which is precisely what we are working towards behind the scenes.

"We greatly appreciate everyone's enthusiastic response to the possibility of a proper reunion, and as a unit, DARK ANGEL will do what will be best. For us and our amazing fan base.

"Again, we truly appreciate all of you."

"It has come to my attention that shows are being booked and promises being made in the name of DARK ANGEL and some of its former members. No one, as far as I know, has been given authority to speak for or conduct business on behalf of DARK ANGEL, myself or any other ex member. Not to mention making any promises regarding the future of the band.

"There are other ex members who would love to be involved in this if it is done correctly! And protect our legacy!

"I, and others behind the scenes here, have asked other ex members many times to stop the postings on Facebook, other web sites, and doing interviews regarding the future of the band. But it continues.... This is all premature. There have been NO rehearsals yet, and little if any face-to-face meetings. But we are talking about 2014!

"I'm all for a guy doing an interview and talking about his glory days with the band. But if you start making unapproved statements about the future of the band? You're off course!

"When I was last in the band, Ron Rinehart was my singer. And IF the band were to come back and continue. he would STILL be my singer. He was our rock when we needed him and there is NO WAY I would do this without him. He and I talk daily and are as close now as ever. If anything, all this talk has brought us all back into more frequent contact! Which is a wonderful thing.

"I wish the very best for any ex-DARK ANGEL member in their endeavors. In fact, I encourage them to write their own music come up with their own band name and get out there and play! But to lead the fans to believe anyone other than Ron would be fronting DARK ANGEL, and that this band will be allowed to do anything without its key members just is not true. The legend cannot truly 'return' unless the key members are on board!

"I look forward to 2014. And I believe we can make some special things happen!"

"DARK ANGEL believes in providing our incredible fans with the best show that we can possibly deliver, as well as protecting our valued legacy.

"Any future statements will come from DARK ANGEL or our management.”

Mike "Gonz: Gonzales (bass): "I just want to make a statement about the possibility of a DARK ANGEL reunion. It is true that we are talking about doing a run next year, but we are still in the early stages of this discussion. We all plan to sit down together in the near future and reconnect and jam a bit.

"We will keep you posted as things develop.

"I can't emphasize enough that this is just discussing a reunion. I have not agreed to any appearances yet. Hopefully things will work out.

"I am currently playing in VIKING, as most of you know. Our new album titled 'No Child Left Behind', will be dropping very soon. I am very excited about this band and album. It is the first album Gene and I have played together on since 'Time Does Not Heal' and I can't wait for everyone to hear it. It's brutal!

"In closing, I just want to thank everyone for their support and friendship. Hopefully I'll be seeing you on the road very soon!"

Speaking to Uwe Harms of Germany's Radio Gehacktes on August 8, original DARK ANGEL vocalist Don Doty stated: "Mike is still playing with one or two other bands, just as Gene is, but they're gonna go ahead and reschedule with the other bands so they can fit DARK ANGEL in. DARK ANGEL will come first.

"Gene is quite busy, as we all know, and he does have a lot of things going on [including TESTAMENT and DETHKLOK], but seeing this opportunity, he definitely wants to be on board, and he's very excited about this, as I am."

Regarding DARK ANGEL's future plans, Doty said: "We started to book some shows. I'm still waiting for our manager, Rob, to go ahead and see what he has in store for us. We're gonna take it one step at a time. [In addition to the Keep It True], there's gonna be a few other [dates] that are gonna be happening; I can't really release those yet."

Asked what he has been doing since leaving DARK ANGEL in 1987, Doty said: "It's a long story, and at the same time, it's a short one. I basically started a family and showed up to my last show [with DARK ANGEL] and told the guys, 'Hey, look, [I have a] baby [on the way] and I can't be on the road and do the family thing; it was just too hard for me. There were too many beautiful women in the world and there were too many other opportunities to go off the deep end, and I just could not do that. So with that being said, I took a step back and I told the guys, 'There will be a day and I will come back and we will finish what we started."

DARK ANGEL released two albums with Don Doty on vocals — 1984's "We Have Arrived" and 1986's "Darkness Descends" — before he exited the group and was replaced by Ron Rinehart (after a brief stint with Jim Drabos in 1987). The band issued two more studio LPs — 1989's "Leave Scars" and 1991's "Time Does Not Heal" — before calling it quits in 1992. Rinehart, Hoglan and Meyer reassembled DARK ANGEL more than a decade ago but were forced to abandon their reunion plans after health issues reportedly put an end to Rinehart's singing career.

Doty told Radio Gehacktes that his reasons for wanting to put DARK ANGEL back together are pure. "I'm here for the fans, because they've been there for me and it's their turn," he said. "Let's get back and let's have some fun." 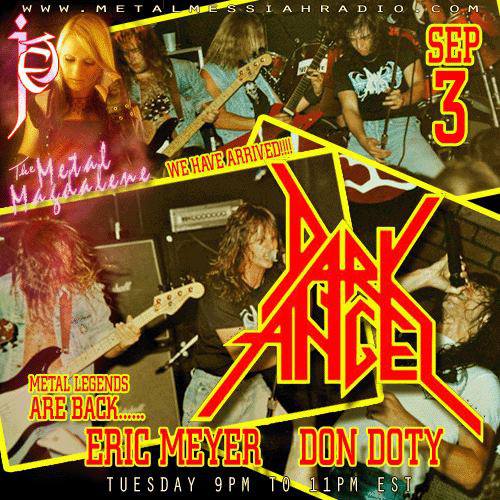