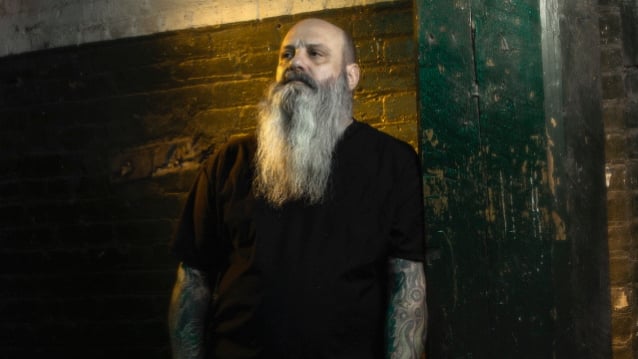 In a recent interview with Kerrang! magazine, CROWBAR frontman Kirk Windstein said that he finally addressed his substance abuse issues around 10 years ago. "I started drinking at home instead of going out to bars, because it was easier for me to avoid cocaine if I didn't go out to where it would be," he explained. "I erased all the dealers from my phone. I quit drinking hard liquor for the most part, but I had a little hangout room where I would watch sports, play guitar and drink beer. Before that, I would go to a bar, not realize how I'd got home, pass out on the couch and wake up with two bags of coke. Then, of course, I'd go to the store to buy beer, because if I've got cocaine, I've got to have beer. And vice versa — if I went to a bar, I'd have two beers, then I'd be calling a guy trying to score. It was an ugly thing to go through, but they say that what doesn't kill you makes you stronger, and I really do believe that to be true."

Back in 2011, Windstein told the San Antonio Metal Music Examiner that he didn't go to rehab to beat his addiction. "I was in a downward spiral for years and years and years, and you know, you get to a point of, 'This is enough,'" he said. "I always make damn sure to say this: If I was a regular guy working at Home Depot and had a drinking problem, people wouldn't talk about it. But because I'm in a band... For me, I'm in a good place and take it a day at a time. It's a lifestyle change in general, not just about alcohol. It's about getting my life in order, eating right, working out right, getting out of debt, and try to be the best father I can be, the best musician. You live and you learn…. I never want to be back to where I was, let's put it that way. It hits you like a hammer, and it's not a good thing where you're a physical slave to drinking. You need to do a lot of soul-searching and find what works for you."

Windstein told Metal Hammer magazine that the support from his peers in the music industry "has been great. They all understand it," he said. "Everyone I've met in this business, they all understand it. It's part of it. It's like an occupational hazard. It's in your face 24⁄7, and what used to be fun, partying and cutting up with the guys became a really bad thing. Enough is enough. That's it."

Last month, Kirk confirmed to the "Does It Doom?" podcast that CROWBAR has completed work on its new album for a tentative September release via eOne.

CROWBAR's latest LP, "The Serpent Only Lies", was released in 2016 via eOne.