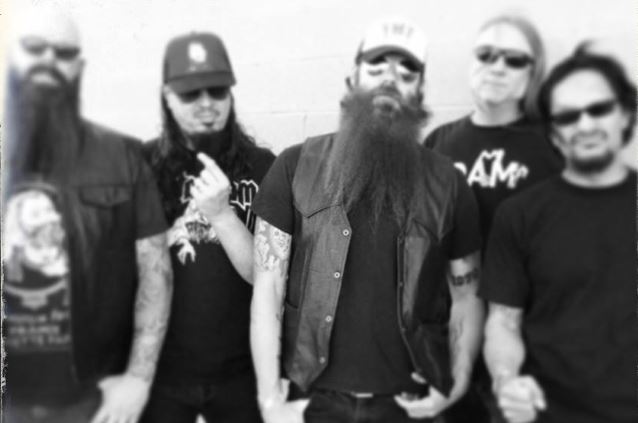 Explains Locicero in a statement: "Tim and I started an idea in 2004. This idea was spawned from two major label acts that hastily broke up and were on the rebound. Three parts MANMADE GOD and and one part SYSTEMATIC. We had no set path or direction when we started jamming together; we just wanted to make great hard rock music. The kind of music we wanted to hear. No niche. No one set genre. Just cool music. As a consequence, it was difficult for some listeners to know exactly how to classify us.

"As time forged on, we had a few other very talented musicians with us at various stages. In 2014, we eventually set the lineup with Andy Galeon on drums. This was our strongest lineup yet and we went on to record our third full length with Eric Kretz [STONE TEMPLE PILOTS] producing and recording. It's the most complete and focused offering we've ever done as a unit. Unfortunately, we won't be operating as a band when it's released. Such is life. Sweet and salty.

"There were few other projects that Tim and I had spinning to keep us occupied in those twelve years. But to both of us, SPIRALARMS was always number one. Even with the reformation of FORBIDDEN from 2008-12, I wanted SPIRAL to be the band to ride into our later years. Sometimes life doesn't work out the way we expect it to. Most of the time, really.

"The last year has been a bumpy road of great shows, hard knocks and disappointments. I've come to realize that it's too difficult to jam a square peg into a round hole with this band. We've grown apart. Tim and I both leaders and he wants to blaze his own path. Ironically, that is the very best thing for both of us. It allows me re-explore my journey without feeling guilty for taking time away from SPIRALARMS.

"So thank you to our fans, our families and our friends who've stuck by and believed in SPIRALARMS all these years. You've witnessed a band that maybe should have been much bigger in notoriety, but we've all become better people. I must also thank Tim, Brad, Chris and Andy. We did some great things together.

"Sorry we have to call it a day. But as I've learned to after all of these years, never say never. One door closes, another one opens..."

Locicero also commented on the possibility of a FORBIDDEN reunion, saying that putting the band back together is "easier said than done. As things stand, FORBIDDEN still has a contract with Nuclear Blast. But the schematics are very confusing here. When we ended, there was two members from out of state (one out of the country) plus Matt [Camacho, bass] and Russ [Anderson, vocals] retired from music until further notice. All of this presents a large hurdle if we just 'wanna get together to jam.' So you must understand that it is simply not likely. But as I stated, never say never."

SPIRALARMS' second album, "Freedom", was released on October 22, 2013 via Steamhammer/SPV.