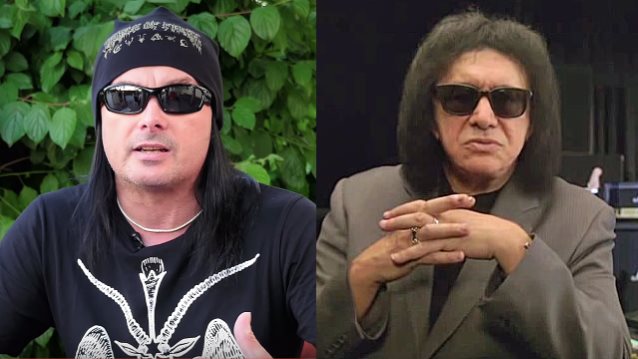 CRADLE OF FILTH frontman Dani Filth says that Gene Simmons is an "idiot" for attempting to trademark the so-called "devil's horns" hand gesture.

The KISS bassist/vocalist withdrew his application to trademark the symbol in late June — less than two weeks after filing with the federal copyright office.

Most music fans slammed Simmons for the trademark request, saying the symbol has become ubiquitous and means different things to different people.

Ronnie James Dio's widow Wendy also criticized Simmons for attempting to trademark the hand sign. She told TheWrap: "To try to make money off of something like this is disgusting. It belongs to everyone — it doesn't belong to anyone. It's a public domain, it shouldn't be trademarked."

Asked by France's Duke TV for his thoughts on Simmons's trademark attempt, Dani said (see video below): "I think Wendy Dio said that Ronnie did it first, but it didn't belong to him either. It's an ancient symbol.

"Gene Simmons is just an idiot," he continued. "If he could, he'd patent the air. Do you know what I mean? I'm sure he's invented everything anyway — the lightbulb; it wasn't Edison, it was [Gene]. Trees, he invented them. Shoes, walking… I attribute everything to the great Gene Simmons."

In his original request, which was filed on June 9, Simmons described the sign as consisting "of a hand gesture with the index and small fingers extended upward and the thumb extended perpendicular." He paid $275, seeking to use the hand signal symbol for "Entertainment, namely, live performances by a musical artist; personal appearances by a musical artist."

Gene claimed the gesture was first used in commerce on November 14, 1974, which corresponded to KISS's "Hotter Than Hell" tour. He wrote in his signed declaration that he believed "no other person, firm, corporation or association has the right to use said mark in commerce, either in the identical form or in such near resemblance."

Gene has been unapologetic about his trademark attempt, telling Windsor Star last month: "I regret nothing. Wake up every morning and let your conscience be your guide.

"Did you know I own the money bag logo?" he continued. "The dollar sign with the bag of money. I own all kinds of things. I own 'motion pictures' as a trademark. Anyone who thinks that's silly — the silliest thing I've ever done is wear more makeup and higher heels than your mommy. People said, 'You can't do that.' Actually, bitch — I can. I can do anything I want to do."

It's unclear why Simmons suddenly withdrew his application to trademark the gesture but it's unlikely he would have succeeded anyway.

Copyright lawyer Ronald Abrams told Forbes that such hand gestures can't be trademarked unless they are part of a logo. Trademark attorney Michael Cohen with Cohen IP Law Group in Beverly Hills, who deals with trademark, patent and copyright infringement cases, concurred, telling the Los Angeles Times that it would have been very difficult for Simmons's application to be approved because the gesture has become "genericized."

Simmons's version of the gesture is actually "I love you" in American Sign Language, with the thumb extended, rather than the thumb holding two middle fingers close to the palm.