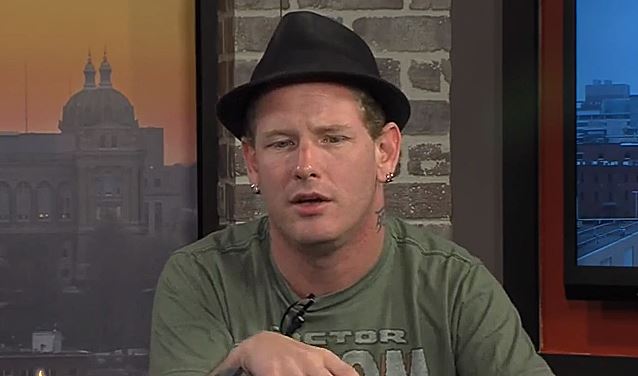 SLIPKNOT and STONE SOUR frontman Corey Taylor was interviewed on the August 23 edition of the "Great Day" show on Des Moines, Iowa TV station KCWI 23. You can now watch video footage of his appearance below.

Taylor's recently published book, "A Funny Thing Happened On The Way To Heaven (Or, How I Made Peace With The Paranormal And Stigmatized Zealots And Cynics In The Process)", chronicles Taylor's experiences with the paranormal and his quest to find an explanation for such incidents. Taylor told The Pulse Of Radio that he decided to seek out answers after too many strange things happened to him and around him. "It's amazing what people will come up with to rationalize something that can't be rationalized," he said. "Look, if something has a definite, real explanation, I'm the first to go, 'Oh, OK, that makes sense.' But some things cannot be explained, like a thermos being thrown behind me when I'm the only one awake in the house at seven in the morning. The list goes on and on for me, you know, so it's like, it's time for me to start kind of figuring things out for myself."

Taylor said he sought out insight from so-called "ghost hunters," skeptics and religious leaders while working on the book.

"A Funny Thing Happened On The Way To Heaven" landed at No. 23 earlier this month on the New York Times "Hardcover Non-fiction" best sellers list, three positions higher than his first memoir, 2011's "Seven Deadly Sins".

Taylor told The Pulse Of Radio recently that his next book may be a collection of columns he's written over the past 12 years for U.K. magazine Rock Sound, while his fourth book may be his first attempt at a novel.

While STONE SOUR plans to take the rest of the year off, Taylor will perform with SLIPKNOT on October 19 in Brazil. The band will then begin putting music together for its long-awaited fifth album in early 2014.