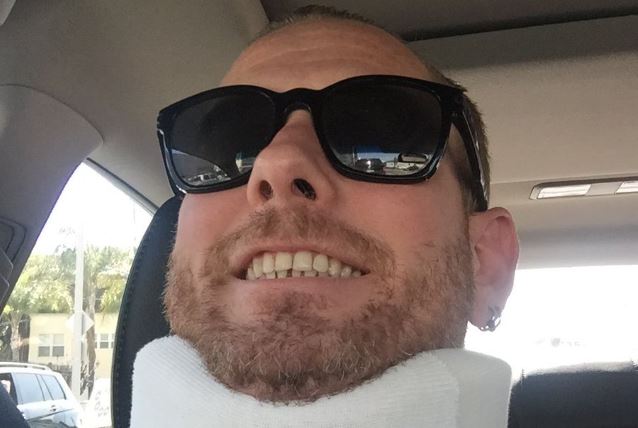 SLIPKNOT frontman Corey Taylor has offered more details on the medical procedure which has forced his band to postpone part of its summer tour.

Taylor announced on Facebook Friday afteroon that he had undergone a last-minute spinal surgery and was recovering. He thanked SLIPKNOT's fans for "having [his] back" and supporting him as the group postponed its trek that was supposed to start next Thursday, June 9 in West Valley City, Utah.

He later tweeted that he "basically broke [his] neck a while back and didn't realize it." He added that he had to have a disc replaced and needed some additional work on his vertebrae.

Earlier today, Taylor told the people who suggested that the surgery could be part of a more serious health problem to "calm down". He wrote: "Enough with the conspiracy theories. I quit smoking because I wanted to. I had emergency surgery because shit came up during my physical."

Twelve SLIPKNOT shows are being rescheduled for August, with the tour now kicking off on June 28 in Nashville.

SLIPKNOT is continuing to tour in support of its latest album, ".5: The Gray Chapter", which sold 132,000 copies in the U.S. in its first week of release to land at No. 1 on The Billboard 200 chart.

The CD was released in October 2014 following a six-year hiatus during which founding SLIPKNOT bassist Paul Gray died and original drummer Joey Jordison was dismissed.

Basically broke my neck a while back & didn't realize it. Had 2 have disc replaced & work on vertebrae. Those 1st shows rescheduled for Aug.

Enough w/ the conspiracy theories. I quit smoking b/c I wanted to. I had emergency surgery b/c shit came up during my physical.
Calm.
Down.