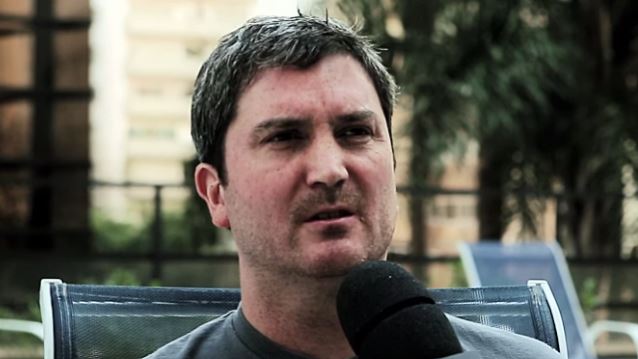 Bassist Dan Maines (pictured) of Maryland rockers CLUTCH is sitting out the band's current live shows so that he can stay at home to await the birth of his child. Filling in for him is FU MANCHU's Brad Davis.

CLUTCH has set "Psychic Warfare" as the title of its eleventh album, tentatively due in September via the band's own label, Weathermaker Music. Songtitles set to appear on the follow-up to 2013's "Earth Rocker" include "X-Ray Visions", "Firebird", "Quick Death In Texas", "Our Lady Of Electric Lights", "Monsters", "Decapitation Blues" and "Son Of Virginia".

The basic tracks and most of the guitars for "Psychic Warfare" were laid down at producer Machine's studio in Dripping Springs, Texas, while the remainder was recorded at CLUTCH's studio in Maryland.

In a recent interview with Pollstar.com, vocalist Neil Fallon stated about CLUTCH's forthcoming album: "There's nothing out of the ordinary of the CLUTCH canon [on the new CD]." He continued: "I think these songs were written so soon after 'Earth Rocker' that they have a lot in common. It's a faster record. It think it shares a bit of the sense of humor, lyrically, with 'Earth Rocker'. There are a lot of hooks on this record."

Dan had to bolt back to Maryland and have a baby. So Brad Davis of @fumanchuband was kind enough to lend his skills and bring this tour on home. His warm up routine is a bit different than Dan's. @creepyfingerseffects