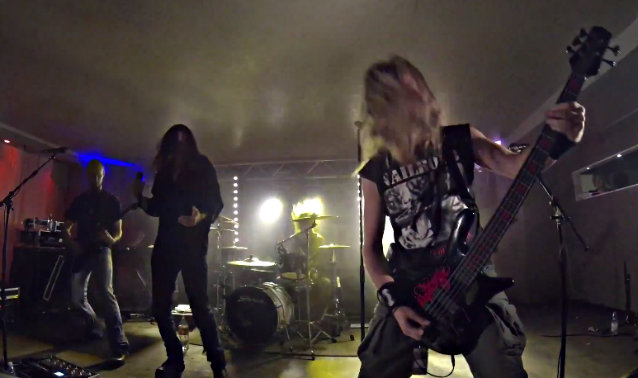 CIVIL WAR is working on material for its sophomore album. The group recently stated: "Without saying too much, we can reveal that it will be more power and more metal!"

CIVIL WAR's full-length debut, "The Killer Angels", was certified gold in Sweden by the International Federation Of The Phonographic Industry for sales in excess of 20,000 copies.

(Note: The International Federation of the Phonographic Industry [IFPI] in Sweden has revised the sales requirements for albums to reach gold status in the country twice in the last 11 years — from the pre-2002 level of 40,000 to the current 20,000.)

The members of CIVIL WAR were presented with their gold plaques before headlining the Metal War festival in Budapest, Hungary.

Commented the band: "Selling 20,000-plus in our home country is something none of us could ever imagine when getting into the sessions leading up to the album. Even though we felt we made a solid record, getting these numbers was still something we couldn't predict upon our wildest imagination."

Borrowing its name from the novel by Michael Shaara about the Battle of Gettysburg, "The Killer Angels" was recorded by Jonas Kjellgren at Studio Myhrer (which is actually the bed and living room of keyboard player Daniel Myhr), Black Lounge Studio and Peter Tägtgren's The Abyss in Pärlby, Sweden. Artwork comes courtesy of Polish artist Lukasz Jaszak.